Ben Johnson: My 1986 positive test was covered up 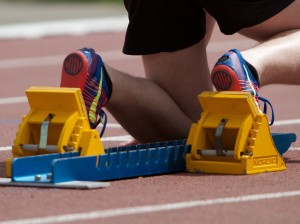 Sprinter Ben Johnson has admitted that he tested positive for a doping offence in 1986 – two years before he was busted after winning the 100m at the Seoul Olympics in a world record time of 9.79 seconds.
The race has been dubbed the “Dirtiest Race in History” with six of the eight starters later testing positive for doping offences.
“I was with Diadora, a shoe company,  and the boss told me that his rivals were Nike, Puma and New Balance and that if I won a gold medal he would give me his house! So they made the positive test go away and I was only told afterwards,” said Johnson.
He was speaking at a live Newstalk “Off the Ball” debate on athlete retirement and mental health organised by the Crossing the Line charity in Dublin’s Trinity College.
When Johnson heard that he had tested positive in Seoul, he felt that his legs had been cut from under him. “I had seen the money that the shoe companies and the IAAF made from athletics. The athletes were left out in the cold.”
Making the most money of all was his great rival Carl Lewis, and Johnson still believes the Lewis had some part to play in his downfall, although he is reluctant to point a finger directly. “We were all in the same boat. All trying to do our best and make a little money. Sport is corrupt and dirty and it’s going to stay that way,” he says.
Johnson feels no remorse for his decision to take steroids. “I was always talented – I was on the national team from the age of 16. When I was young and watching those guys running fast on TV, I thought they were all clean until it was brought to my attention that they were all on drugs. I took the drugs so that I could recover quicker from training, and because it wasn’t a level playing field.”
Johnson had hamstring problems coming up to Seoul. He put on 25 pounds in weight and was struggling. “At one point I thought I would quit the sport. But then I thought I’ve trained like a horse for twelve years six days a week. I have just one more step to take.”
Johnson admits that he suffered severe depression from the age of 14 to after his downfall in 1988. “When my family left moved to Canada from Jamaica in 1972, my father stayed behind. So at a young age, I was the man of the house and knew I had to try and get money from the Government or get races in Europe so I could give something back to my mother.”
After Seoul, he would lie at night stricken with anxiety. “I would think I was going to have a heart attack. I would say to myself you can’t die now, you have a family to support. Yes it was tough, but my friends supported me. My mother told me to leave everything in God’s hands.”
So if he had the choice, would he do it again? “If God says it’s my destiny then yes,” he says. “My conscience is clear.”
These days he’s  happy to live a simple life providing for his daughter and granddaughter. “I coach a bit – soccer players with one guy playing with the 2nd division in Italy now – and NLF hockey. I do some reality shows in Japan. My goal is to get black kids off the streets and into education.”
“I give myself a pat on the back – I kept myself out of crime and other scenes. Every day I wake up it’s a miracle.”
Also speaking at the debate were soccer international Niall Quinn, who has set up a charity to help ex-football players adjust to life after retirement and legendary diver Greg Louganis, a vocal campaigner for gay rights.
Gearoid Towey, who with fellow Irish rowing Olympian Niall O’Toole organised the talk, spoke of the trough he fell into about a year after retiring. “For every high, there is low and in terms of our elite athletes this is something we desperately need to address. Over a hundred Olympians, including medalists, have committed suicide since World War 2.  Hundreds more have served or are serving time in prison. Countless others are suffering in silence in their own prisons of depression and drug dependency,”  he said.
Tickets are still available for Saturday’s Crossing the Line summit in Trinity College, where Johnson, Louganis and a number of mental health experts are among the speakers. See www.crossingtheline.com