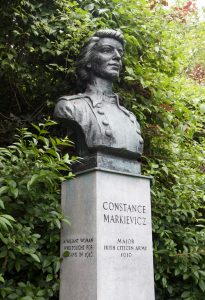 In the process of editing the Markievicz letters for a new edition due out this autumn, have come across this wonderful quote from almost exactly  99 years ago. Plus ca change!

Cork Jail
14 August 1919
It seems to me that England is gaily riding to ruin, unless there is some wonderful secret policy somewhere. I can’t see where it will all end. The futility and brainlessness of all leaders in every camp. With the exception of a few clever ‘doctrinaire’ socialist people who can state a case — they seem to be devoid even of common sense. The only way for an unorganised majority is to rush them in to doing things and to tell them what to do.
Everybody seems to be splitting hairs about ‘direct action’ and other phrases, while one bit of liberty after another is taken from them. Lloyd George puts off and throws sops to Cerberus and every clique in England follows suit. They would sell their own souls for a few pence.

….you never know what’s going to happen from one day to another if you have the great privilege of living under the Union Jack. The leaders are so like a lot of old cormorants speaking over the carcass of a dead whale.