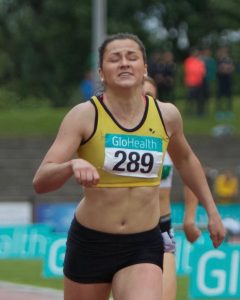 Only Irish athlete left is Matt Bergin who goes in tomorrow’s men’s 5000m final. In  the heats, Bergin took one of the five automatic qualifying spots when he finished third in the second of two heats. His time of 14:25.10 puts him third on the list of qualifiers for the  final.

On Saturday, Phil Healy finished seventh in the women’s 200m with a time of 23.81 secs yesterday. Healy had qualified for  the 200m final after winning her heat in 23.87 secs and then finishing second in her semi-final in 23.80 secs yesterday. She had the eighth fastest time of the finalists. Marcus Lawler didn’t line out in the men’s 200m heats.

On Thursday, Paul Byrne made it through to the semi -finals of the men’s 400m hurdles as a fastest loser. He finished seventh in Friday’s  final. The heats of the women’s 5000m, scheduled for Thursday, were cancelled, which means both Shona Heaslip and Emma Mitchell will run in Sunday’s final.

On the opening day of competition last Wednesday, Emma Mitchell finished ninth in the women’s 10,000m. Niamh Whelan qualified for the semi-finals of the women’s 100m as a fastest loser after running two rounds. A day later, she finished seventh in her semi-final. Marcus Lawler went out in the second round of the men’s 100m.