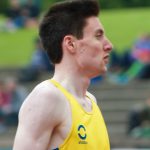 Mark English qualified for the World Championships with a time of 1 min 45.42 secs for second place in the men’s 800m at today’s Diamond League Meet in Stockholm.
Race winner was Thijmen Kupers of the Netherlands in 1:45.02. Finishing third behind English was Rynhardt van Rensburg of South Africa in 1:45.73.
In the 1500m, 16-year-old Jakob Ingebrigsten of Norway continued his phenomenal season by clocking a time of 3:39.92 – just nine seconds behind the winner Timothy Cheruiyot of Kenya who ran a world leading time of 3:30.77.
In front of his home crowd, Karsten Warholm  of Sweden showed that his victory in Oslo last Friday was no fluke when he again came home the winner of the 400m hurdles in 48.82 secs. Behind him were Rasmus Magi of Estonia and former Olympic and world champion Yasmani Copello, the Cuban who runs in Turkish colours. All three will line up against Thomas Barr at next weekend’s European Team Championships in Finland.
After his pace-making duties in Oslo on Friday, Paul Robinson headed for the SL Benfica meet in Lisbon, where he recorded a season’s best time of 1:49.60 when finishing third in the 800m yesterday.  Winner was Jamal Hairane of Qatar in 1:48.77.I n Leiden, the Netherlands,  Kevin Dooney was  less than two seconds off his PB when he clocked 29:11.85 for 10,000m at the Gouden Spike meet, finishing 11th in the race. Dooney’s best is 29:10.14, run in 2014.
At the English U20 Championships in Bedford yesterday, Michaela Walsh of Swinford AC won both the shot and hammer. Her 16.13m in the shot improved on her own Irish junior record of 15.48m. In the hammer, her 62.62m was just off her best of 62.79m. Walsh went on to finish second in the U23 shot put today and also won the hammer with 62.71m. In the discus, Niamh Fogarty of North Westmeath nailed down a second B standard for the European Juniors throwing 45.90. Sarah McCarthy of Mid Sutton won the U23 long jump, while Finn Valley’s John Kelly won the U23 men’s shot. 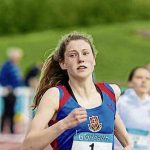 Locally, at the Leinster Juvenile Championships in Tullamore, multi-eventer Kate O’Connor from Dundalk was comfortably inside the the European junior qualifying mark of 5.95m for the long jump with a best of 6.10m. Earlier this season, O’Connor won the Street international schools heptathlon in England.
Catch-up: Irish 800m record holder Rose-Ann Galligan opened her season in Turku last Tuesday when she ran a time of 2:09.46 for 800m. In Huelva also on Tuesday, Michelle Finn finished 17th in a 3000m steeplechase in 10:53.72. A day later, at the BMC meet in Watford, Alanna Lally of UCD was third in the 800m in 2:06.45.

On the roads, John Coghlan of MSB and Catherina McKiernan of Annalee A, who had both run in the Irish Runner 5-Mile a day earlier, were the winners at the Castleknock 5km.

Roads: Maunsell, Shaughnessy tops at Irish Runner ‘5’
T-F League Round 1- who is where?