On Your Marks – Herald July 10

A striking feature of the Woodie’s DIY National Juvenile Track and Field Championships held in Tullamore over the weekend was the number of records set in the more technical events.

Finn Valley’s John Kelly, who competes in the World Youth Games next week, enhanced his growing reputation when he won the M17 shot put title with a best of 17.90. Younger brother James beat John’s record when he won the M14 shot with a best of 15.52. Also continuing his excellent season was Stephen Rice of Greystones, winner of the M17 javelin with a record-breaking 59.25m.

In the M14 javelin, the previous record went six times before Jack McWay of Newbridge finally came out on top with a throw of 43.49 in the final round – just 23cm ahead of Finn Valley’s James Kelly.

Other field event and hurdles record breakers included Fiona Tuite of Fingallians 13.77m in the W18 shot; Daniel Ryan of Moycarky Coolcroo 11.31 in the M15 80m hurdles;  David McDonald of Menapians 6.22 in the M15 long jump; Michaela Walsh of Swinford 36.42 in the W16 javelin  and Raheny’s Peter O’Brien who in a class of his own in the M19 pole vault, soaring over 4.41m.

Making it a W16 treble was Elizabeth Morland of Cushinstown who won the long jump in a record 5.86m and also took both the 80m hurdles and high jump. Morland heads for the European Youth Olympic Festival next week. 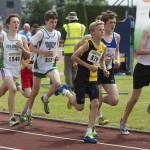 Not that there weren’t some eye-catching performances on the track – and Aislinn Crossey is certainly one to watch. The Newry girl, who was second in the 800m behind Siofra Cleirigh Buttner at the Aviva All Ireland Schools, ran away with the W19 800m in 2:07.7 – not far off her schools time of 2:06.43.

At the European Mountain Running Championships in Bulgaria, the senior Irish women’s team led by Raheny’s Kate Cronin in 25th came 10th. Ian Conroy, also Raheny, was best of the senior Irish men in 35th place, with the team 14th. In the junior races, best result was a 25th for DSD’s Killian Mooney.

Darren McBrearty of Letterkenny won a competitive 800m at the GV Ryan/Louis Vandendries IMC  meet with five athletes breaking 1 mins 50 secs. In the chase for the line, McBrearty made it just ahead of Welsh visitor Joseph Maynard and Eoin Everard from Kilkenny in 1:48.71. Lagan Valley’s Katie Kirk won the women’s 800m in 2:07.56. Over 1500m John Travers of Donore was first home in 3:47.61.

Colin Costello of of Star of the Sea  and Donore’s Sorcha Nic Dhomhnaill were the winners at the South O’Hanlon 5km in Senechalstown. In the women’s over 45 class sisters Imelda Clarke, Mary Hanley and Bridget Clarkee finish first , second and third – and won the overall women’s team prize. In the W50 class, Mary Watters from Navan just beat former Irish international Rosie Lambe by a single second. Next up in Co Meath is Sunday’s Dunleer 4-Mile.

Online entry for the fifth St. James’s Hospital Liberties 6km Fun Run on Thursday July 18 (7.45pm) is open until next Monday for a fee of €21 with all of it going to one of the country’s best known hospitals. Over the past four years, this unique race through Dublin’s Liberties has raised a staggering €85,000 for St. James’s.Participants get a a souvenir t-shirt and a massage, with cash prizes to the first three men and women home. See www.stjames.ie/funrun/‎