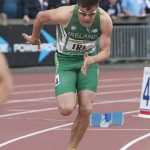 Victory for Brian Gregan in in the 400m with a personal best 45.26 secs proved the highlight of the Morton Games in Santry tonight. The time was a meet record.
After four years of struggle, Gregan, aged 27, is right back to his best and he proved it by moving smoothly into the lead with 100m to go.
He won with ten metres to spare on the Brazilian athlete Anderson Hnriques who finished in 46.51 secs. Finishing sixth was schools champion Christopher O’Donnell in 47.35 secs; Luke Lennon Ford was seventh in 47.72 secs.
In the Morton Mile, eleven of the sixteen athletes entered broke four minutes. They were led home by the flamboyant American Robert Dominik, who had won the mile at the Letterkenny International last weekend and will move on to the Cork City Sports next week. His time in Letterkenny was 3:59.58; in Santry, he motored home in 3 mins 55.71 secs after the field went through 800m in 1 mins 58 secs.
A close second was the Australian Morgan McDonald who finished in 3:55.79, with Sam Prakel of the USA third in 3:56.55. Clonmel’s Sean Tobin finished 11th in 3:58.70. The other two Irish came agonisingly close to making the 4-minute barrier. Letterkenny’s Danny Mooney was 13th in 4:001.2 and Kieran Kelly  of Raheny Shamrock  14th in 4:00.70, a personal best, with a personal best for the 1500m along the way also. Winning the junior men’s mile in 4:21.70 was DSD’s Luke McCann.
Finishing third in the 800m was Ciara Mageean of UCD, who lies second on the Irish rankings with a time of 2:00.79 and has her eye on a sub-two minute time.
It was not to be tonight. British athlete Adele Tracey led from 600m and finished in 2:01.53. Passing Mageean for second with the line in sight was Angie Petty of New Zealand in 2:01.82. On the plus side, Mageean’s strong run and her time of 2:02.20 show that she’s in good form for the 1500m at the World Championships next month. Claire Mooney of St Coca’s finished 10th in 2:05.13
In other good performances, Galway’s Sean Breathnach showed a welcome return to form with 18.20 m in the shot, close to his best of 18.27 (indoors). Sarah McCarthy of Mid-Sutton went over six metres in the long jump with 6.03m; her best is 6.24m.
In the 5000m, the Australian Stewart McSwenyn broke Eamonn Coghlan’s stadium record with a personal best time of 14:11.78, which is a World Championships qualifier.