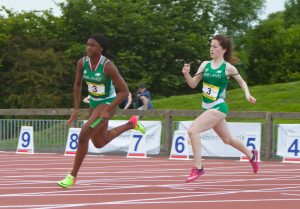 Ireland finished a fighting second overall behind all-conquering England in today’s SIAB Schools International in Santry.
Highlights of the day included victory for the Irish girls in the 100m relay, with Patience Jumbo Gula bringing the team home after hard work by Lauren Roy, Rhasidat Adeleke and Niamh Foley.
In a thrilling boys’ 4 x 400m, which was the final event of the day, the Irish team caught and passed Scotland for second on the final leg.
Earlier Jumbo Gula, of St Vincent’s Dundalk, had won the 100m in 12.21, while Adeleke, of Presentation Terenure, was second in the 200m.
On a good day for the Irish girls, multi-eventer Kate O’Connor of St Vincent’s Dundalk won her specialist javelin with a throw of 49.26m. O’Connor also finished fourth in the shot where Ciara Sheehy  of St Mary’s Charleville was third.
In the high jump, Caitlin Kennedy of John the Baptist finished second, while in the long jump, Ruby Millett of Kilkenny College was also second and Sophie Meredith of SMI Newcastle West third. Miriam Daly of Scoil Mhuire finished second in the 300m hurdles while Aimee Hayde of St Mary’s Newport was second in the girls’ 1500m. 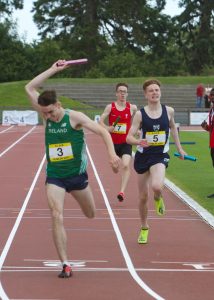 Morton Games: Gregan the hero with PB 45.26 secs in 400m
Round-Up: Records fall at final day of All Ireland Juvenile T-F. Plus roads (and Snowdon!).