A huge PB of 2:00.79 for Ciara Mageean of UCD proved the highlight of tonight’s Morton Games in Santry. Last month, Mageean improved her time to 2:02.84 at the Northern Irish Championships in Belfast, and she showed  she meant business tonight going through the opening 400m lap in 59 secs  and 600m in 1:30 along with British athlete Alex Bell. 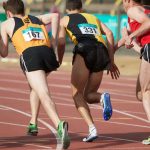 Only with the line in sight did Bell push to the front for a narrow victory in 2:00.53. Mageean’s time puts her fourth on the all-time Irish list behind Rose Ann Galligan with 2:00 58, Sonia O’Sullivan 2:0069 and Caroline O’Shea 2:00.70. It was the perfect send off for the Northern Irish athlete whose next race will be the 1500m heats in Rio.

In the Morton Mile, American visitor Johnny Gregorek moved from fourth place to victory in the final 80 metres. His reward was a personal best3:55.57. There was an encouraging return to racing for Paul Robinson of St Coca’s who kept with the pack and broke four minutes, clocking 3:58.75. Winning the Albie Thomas 3000m was Johnny Taylor in 7 mins 56 secs.

MARK ENGLISH of UCD ran a season’s best 1:45.36 to finish eighth in the 800m at the Anniversary Games in London. That was about half a second off his lifetime best of  1:44.84. Race winner was Pierre Ambroise Bosse of France in 1:43.88.  Sara Treacy of Dunboyne goes in the women’s steeplechase at 15.37 tomorrow.