Kate O’Connor of St Gerard’s in Dundalk won the senior girls heptathlon at the annual Somerset Schools AA/County AA and Open Combined Events Championships hosted by Millfield School in Street, England last weekend.
Competing in her first seven-event competition, O’Connor aged 16, picked up 802 points for her time of 15.30 secs in the 100m hurdles; 879 points for her 1.72m in the high jump, 635 points for 11.61m with the 4kg shot (another first), 806 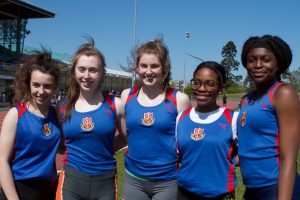 Lisburn’s Peter Glass had accumulated 5,111 points  with three events remaining but had to withdraw  after a 41.50m effort in the discus.