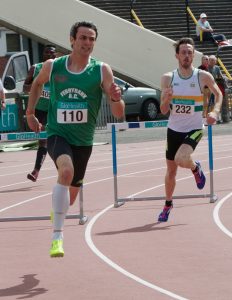 Thomas Barr produced his trademark finishing surge to finish third in the 400m hurdles at the Bislett Games in Oslo – his first Diamond League race of the season.
In a race full of surprises, 21-year-old Karsten Warholm dictated the pace of the race from the start and went on to win in a Norwegian record time of 48.25 seconds. The Cuban, Yasmani Copello who runs in Turkish colours, took second in 48.44 secs, with Barr, who was running in lane 1, finishing in 48.95 secs, just ahead of Marmadou Kasse Hana of France in 48.97 secs.
Kerron Clermont of the USA, the Olympic champion, clattered a hurdle coming off the last bend and finished last in 50.52 secs.

Behind Barr were Rasmus Magi of Estonia 5th in 49.10 secs and Switzerland’s Kariem Hussein 6th in 49.37 secs. Barr is likely to line up against both (assuming they agree to run for their respective countries) at the European Team Championships in Finland.

Also running in Olso was Paul Robinson, who was first pacemaker on the U20 mile where Jakob Ingebritsen set a new age group record of 3:56.29. Robinson, who is 26 and was running in a Nike vest, brought him through 800m in 1:58. Jack Rayner,  aged 21, from Australia then took over and pulled Ingebritsen away from the chasers.

Last month, 16-year-old Ingebrigtsen became the youngest runner in history to break four minutes in the mile at the Eugene Diamond League Prefontaine Classic in the USA.  He ran an impressive  3:58.07 to place 11th in the men’s international mile. His two older brothers also broke four minutes for the mile in Eugene. The oldest brother Henrik finished ahead of Jakob in the International Mile  to finish third with 3:53.79. Filip, who is the current European 1500m champion,  placed eighth in the Bowerman Mile with a PB 3:53.23.