Irish champion Shane Aston of Trim AC got an early birthday present when he was named for the Irish team at the European Combined Events Team Cup taking place in Monzon, Spain on July 1/2.
Aston, who turns 23 today, is joined on the men’s team by England-based Michael Bowler of Enniscorthy AC, aged 25, who racked up a score of 6,768 points at the English Championships. Also picked is Clonliffe’s Rolus Olusa, who has not competed in a decathlon so far this season, although he has produced strong performances in the discus, triple jump, hurdles and pole vault over the past few weeks. 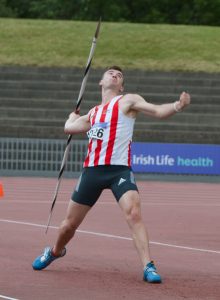 Leading the women’ team is 16-year-old star Katherine O’Connor of St Gerard’s AC who won the English schools international combined events title in Street, Somerset, last April. On Sunday, she qualified in the long jump for the European Junior Championships with a leap of 6.10m at the Leinster Juveniles in Tullamore. Her next outing is Saturday’s  Tailteann Games in Santry where she will represent Leinster Schools in the 200m, shot and javelin.
She’s joined on the team by Sarah Connolly of North Down AC and Amy McTeggart of Boyne AC. McTeggart, a consistent performer over the years, is the current Irish senior champion and won a number of medals at last week’s the CSIT Games in Riga, Latvia as part of an Athletics Leinster team. Connolly, aged 19, competed in the British U20 Championships last month.
Unavailable were 19-year-old Elizabeth Morland of Cushinstown AC who improved on her own Irish record with a score of 5,669 points on June 1 in Ancona and Peter Glass who tops the men’s Irish rankings this season with his score of 7,120 points from Ancona.
Anna McCauley, another 16-year-old rising star, was also unavailable. She finished second behind O’Connor in Street and ranks third this season behind Morland and O’Connor.