Michael McKillop from North Belfast Harriers made it a double celebration for the Irish when he added the T38 800m title in a season’s best 2:00.91 only moments later. It was a remarkable eighth world championship gold for McKillop. 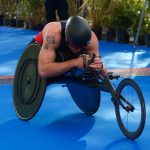 Smyth, who celebrated his 30th birthday earlier this month,  is back on the track this evening in the  200m heats (T13), while Orla Comerford  of Raheny Shamrock makes her  world championship debut in the T13 100m. In this morning’s session, Cushinstown’s Paul Keogan goes in the T37 200m heats.

More than 1,100 athletes from 95 countries are competing in the World Championships, which began on Friday and continues until next Sunday.

First to win medals for Ireland were Niamh McCarthy of Eagle AC in Cork  and Leevale’s Orla Barry who both took silver in the discus  on Saturday. In the F41 discus, McCarthy threw 26.17m  to finish second behind Paralympic champion Raoua Tlili of Tunisia whose winning throw of  32.29m was a championship record. Barry’s 28.89m in the F57 class saw her finish second behind Paralympic and reigning world champion Nassima Saifi who took gold with a massive 34.05m throw.

On Friday evening, Rio Paralympian Greta Streimikyte of Clonliffe Harriers finished a fighting fourth in the women’s T13 1500m final with a time of 4:47.54.

*Raheny’s Orla Comerford finished sixth in the T13 100m final on day four with a time of 12.55secs –  one hundredth of a second off her best set a few weeks ago. This was Comerford’s World Championship debut. Both Jason Smyth who won his T12 200m heat in a season’s best 21.89 secs, and Paul Keogan 3rd  in his T37 200m heat in 25.27 seconds have made it through to their finals.