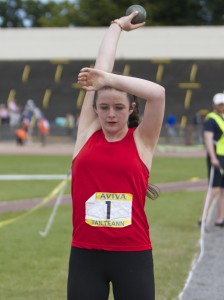 Thrower Michaela Walsh of SM and P Swinford was in record-breaking form at the Irish Life Health Connacht Schools T-F.

Competing at senior level, Walsh set a new record of 15.23m in the shot – not far off the personal best of 15.31m she recorded at the World Junior Championships in Poland last summer. She also won the hammer (no result available); in March, Walsh set a new junior hammer record of 59.64m  at the European Spring Throws meet.

Also impressing was Adam Sheridan of Rice College in Westport who won the junior boys’ shot with 13.44m and the discus with 40.15m. Winning the senior boys’ javelin was Patrick Mills of St Muredach’s Ballina with 49.79m; at inter level, a throw of 49.23m won the title for Conor Cusack of Ballinrobe CS. Ciara McHugh Murphy of MSM Claremorris dominated the junior girls’ javelin throwing a best of 35.01m.

Pupils from St Brigid’s Loughrea won all three boys’ triple jump titles. Brendan Lynch proved best of the seniors with a leap of 12.90m and also won the long jump with 6.27m. Conor Leahy was another double winner, with 11.64m in the inter boys’ triple jump and 6.00 in the long jump. Winning the junior triple jump was Anton Tariov with 9.89m. In the senior boys’ high jump, Jerry Keary of St Raphael’s was the winner with a height of 1.90m. For the inter title, Kelvin Appiah of Moyne CS in Longford also achieved 1.90m.