By admin on May 8, 2016 in badminton, Modern pentathlon, Other sport, Paralympian sport, pitch and putt, squash, Triathlon 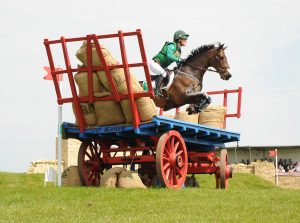 Camilla Speirs on Portersize Just a Jiff at Badminton 16

After a clear cross-country round on Saturday, the Irish pair were lying 17th going into Sunday’s show-jumping. A perfect display moved them up to ninth on the leaderboard. In 2010, Speirs and the diminutive Portersize Just A Jiff hadf inished 14th in the competition.

A squad of 21 Irish riders competes in the Chatsworth three-star competition next weekend. www.horsesportireland.ie

CORK-born Billy Twomey riding Diaghilev has won the Hamburg Derby in Germany after a jump-off. With no clear rounds, the nine horses on four faults battled it out against the clock for the placings.Twomey and the 13-year-old gelding Diaghilev jump clear second time out and their time of 49.96 seconds proved untouchable, leaving Twomey to collect a winner‘s prize of €30,000.

At Drammen’s three-star show in Norway, Limerick’s Paul Kennedy finished fifth in the feature Grand Prix with the Irish-bred mare Cartown Danger Mouse. Kennedy had finished as best of the Irish in the Nations Cup at Drammen on Friday.

In dressage, 20-year-old Alex Baker made a promising international debut for Ireland at the Young Rider show in Segovia, Spain, where he finished third spot with the nine-year-old mare Nibeley Uj Lady Lara.

Natalya Coyle and Arthur Lanigan O’Keeffe  have won the relay at the World Cup final in Sarasota, USA. The Irish pair were lying third after the fencing, swim and riding but pulled away for victory with a superb time of 10 mins 56 .32secs in the combined run/shoot. Second were the Belarus pair Mikalai Hayanouski  and  Katsiaryna Arol, who had taken the win ahead of the Irish last year.

A day earlier, Coyle finished 18th  in the women’s competition, despite getting a particularly difficult horse in the equestrian stage that left her lying in 26th position. Her combined run/shoot was the 13th fastest of the day and pulled her back up to 18th place.

Her silver medals came in the SM6 200m individual medley and 100 breaststroke; she won her bronze in the 50m butterfly. In total, there were 23 personal bests for the young Irish squad. 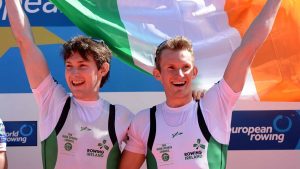 In the women’s singles sculls, which is an Olympic event, Sanita Puspure took bronze  behind Magdalena Lobnig of Austria who won by almost 17 seconds. Puspure was passed for second by Elza Gulbe of Latvia when she missed a stroke in the closing stages of the race. Fourth was double Olympic champion Ekaterina Karsten.
Finishing fourth in their A finals were the lightweight men’s pair of Mark O’Donovan and Shane O’ Driscoll  and lightweight single sculler Denise Walsh. Rio-bound Sinéad Lynch and Claire Lambe were third in the women’s lightweight double sculls B final, finishing ninth overall. 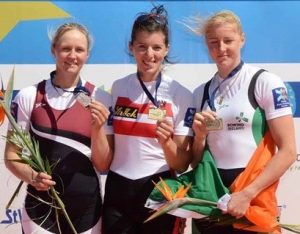 Bryan Keane from Cork finished 11th in 1:59.38 at the World Cup round in Huatalco, Mexico to keep his hopes of qualifying for the Rio Olympics alive. Keane was well up on the 1500m swim which he completed in 17 mins 46 secs and solid on the tough 40km cycle which he completed in 1:06.26. He then clocked a time of 34.13 for the 10km run. Winner was France’s Etienne Diemunsch, who finished in 1:58.23. Before the event, Keane was lying 49th on the list of Rio qualifiers with 55 places on offer. He competes in the final World Cup of the season in Yokohama, Japan, next weekend.