By admin on August 6, 2016 in Canoeing, Other sport, swimming

Jenny Egan of Salmon Leap in Leixlip has won the prestigious Sella Descent in Spain.

Egan, who narrowly missed out on qualifying for the sprint canoeing events at the Rio Olympics, was part of a large group of Irish paddlers who travelled to the 80th version of this historic race in Asturias, first held in 1930.

Like the Liffey Descent, the race is part of the International Canoe Federation’s Classic Series – eight wildwater races on well-established courses in Europe, South Africa and China. 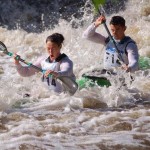 Egan, who won a World Cup 5000m race earlier this summer, completed the 20km point-to-point course in 1 hr 28 mins 25 secs and held off an international field to finish was first of the K1 women.