Thomas Barr of Ferrybank showed that he’s over his recent injury when he clocked a time of 49.39 secs for third in the 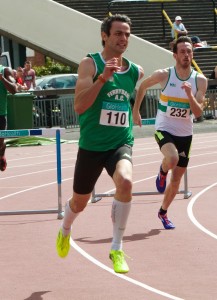 400m hurdles at the  Athletics Geneva meet in Switzerland. This time is just outside the World Championships qualifying standard of 49.35 secs.

Clonliffe’s Brian Gregan won  the 400m A heat with a time of 45.75 secs, while Sinead Denny of DSD clocked 53.54 secs to win the women’s 400m. The time puts Denny top of the current rankings.

On Friday in Belfort,  Kerry O’Flaherty of Newcastle and District ran her first steeplechase in some time, recording a time of 10 mins 5.03 secs for 11th place.