Thomas Barr opened his outdoor season with victory in the 400m hurdles at the Irish Universities Track and Field Championships in CIT, Cork.

Lawler also helped his college to an historic first victory in the 4 x 100m. Backing him up on the team was scholarship athlete Callan Byrne who finished second in the 100m behind  Irish junior and U23 champion Christian Robinson of QUB; Robinson  won the race in 11.13 secs; Byrne was clocked  at 11.30 secs.

In the field, Saragh Buggy  of DCU continued her ever lengthening winning streak in the triple jump with a leap of 12.53 metres. Tom Houlihan of  CIT soared over 4.30m in the pole vault, while Eoin Sheridan of DCU won the men’s discus with a throw of 48.48m. Winning the hammer with  an eye-catching 63.51m was Adam King of DCU; second was Killian Barry of UL with 59.83 secs.

Winning the men’s multi-events title with 3.166 points was Shane Aston of DCU. Amy McTeggart of AIT won the women’s event with 3.283 points. 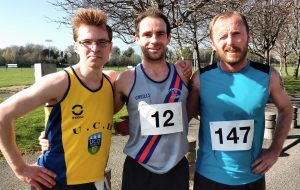 AT THE RAS UCD 5Km, it was DSD on the double with Rob Corbally winning the race in 15:09.6 and Niamh Devlin sixth overall and first woman in 18:30.3. Second of the men was Phil Kilgannon of Sportsworld while second of the women was Irish marathon international Linda Byrne  of DSD in her first race in some time. Big brother Brian was stealing the limelight by finishing fifth in 17:37.3 – over a minute clear of his sister. Full result at www.athleticstiming.com

MARY LEECH AND RORY KAVANAGH were the winners at the Dublin City Council BHAA 2 and 4 mile races in St Anne’s Park. A total of 283 women ran the two-mile race, with 143 men in the four-mile.  The race is part of the Lord Mayor’s Five Alive  Challenge. Full results www.myrunresults.com. 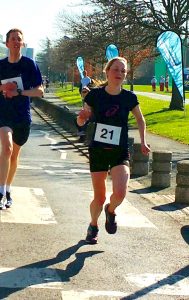