On Your Marks – Herald Dec 5

Reigning champion Fionnuala Britton heads to the European Cross-Country  in Budapest this weekend well aware that defending a title is always a tough proposition.

Britton has prepared well, finishing fourth in an international cross-country in Burgos, Spain last month, where Britain’s Jessica Coulson was just ahead of her. She then finished third at the Cross de l’Acier in France, over half a minute ahead of Laurane Picoche of France who was fifth and second European.
Her most dangerous rival on Sunday is likely to be Portugal’s Ana Dulce Felix,  runner-up last year in Slovenia and third a year earlier in Portugal, when Britton was fourth.
Felix has had a good year, winning the 10,000m at the European Athletics Championships in Helsinki, where Britton was a fighting fourth. Most recently, Felix won the women’s 8km at the International Warandecross Tilburg,  on the same day that Britton was running in France.
In yet another race that day,  in Roeselare, Belgium, Ethiopian-born Almensch Belete, who now competes for Belgium, cruised to victory in the 6.5km women’s race beating Kenya’s Cynthia Kosgei. She will be another to watch on Sunday.
When it comes to the team competition, Ireland has the strongest line-up since the days of McKiernan and O’Sullivan. Apart from Britton, the team includes current interclub cross-country champion Linda Byrne, who first made her mark as an athlete with a fourth in the junior race at the 2005 Europeans, and has targeted these championshis since comepting in the marathon at London 2012.
Ava Hutchinson, winner of the intercounty title a few weeks ago, is another London marathon veteran with a strong cross-country pedigree. She ran in the junior race at the World Cross-Country Championships in 2001 and 2002 and also competed in the senior race in 2011. With strong back-up from Lizzie Lee, Sarah McCormack and Sarah Treacy the team looks certain to improve on its eighth position of last year.
Leading a strong men’s team is Joe Sweeney, who finished fifth

last year – just eight seconds behind the winner Atelaw Yeshe Bekele, the Ethiopian who runs for Belgium. Also selected are David Rooney, seventh  at the NCAA cross-Country, and Breandan O’Neill, 28th in the same race.


Laura Crowe of Riocht is favourite to win Sunday’s National Novice Cross Country in Adamstown after good runs both in the University Road Relays and the intercounty cross-country. Liam Brady leads a strong entry in the men’s race.
Paul Robinson of St Coca’s and DSD’s Linda Byrne were the winners of the Jingle Bells 5km  held on a glorious day in Dublin’s Phoenix Park.
Robinson outsprinted Tom Fitzpatrick of Tallaght to finish in a fast time of 14 mins 18 secs.  MSB’s John Coghlan was third.
Linda Byrne, using the race as a final blow-out before next week’s European Cross-Country, was chased home by the in-form Kerry Harty of Newcastle.
A very special finisher was Sarah Nagle, who walked the course in memory of her late husband Joe.  Before his untimely death in August, Joe was a mainstay of the  race, always dressed for the part. Continuing the tradition, Sarah was beautifully turned out as Mrs Santa Claus. 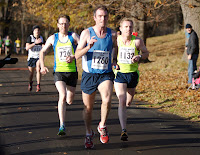 Former Olympic champion Szymon Ziólkowski of Poland will coach  the best of  Irish hammer throwers at a two-day throws training squad in Tullamore and Dublin this weekend. Ziólkowski, the 2000 Olympic champion, has lost none of his appetite for training – he made the hammer final in London a few months ago, aged 36. Joining him is Irish javelin throwing legend Terry McHugh, Irish champion for 21 years.  Info throws@athleticsireland.ie.
Entry is now open for the Tom Brennan Brennan Memorial New Year’s Day 5km in Dublin’s Phoenix Park (12 noon) – an ideal way  to start the New Yar on the right foot!
While most people will aim simply to finish, the course has produced fast times. Last year, Fionnuala Britton set a new women’s course record  of 16 mins 12 sec, while John Coghlan improved the men’s mark to 14 mins 33 secs. Online entry at www.liffeyvalleyac.com
Newcomer Caroline Conway of Sportsworld won the second round of the Women’s Meet & Train Winter League hosted by Fingallians in a drizzly Swords. Donore’s Meabh Pevoy was second and Nicola Kavanagh of Sportsworld third. All the better-known running groups were represented – Blackrock, Clonliffe, Raheny, Dunboyne, Tallaght, Bros Pearse – as well as the three mentioned. Newcomers, both groups and individuals, always welcome  – next race is a first ever at Bushy Park on Sunday January 13.
Philip Harty, back with his original club West Waterford scored a notable win over Clonliffe’s Gary O’Hanlon at the Waterford Half Marathon, winning with a five second margin in 67 mins 29 secs. First woman in 80 mins 36 secs was Clonmel’s Angela McCann.
At the Parkrun 5km in the grounds of Malahide Castle, Eoin Brady and Annette Kealy, who live nearby, made it a family double. Well over 200 of all standards again turned out for this free time trial, which is clearly striking the right note in these cash-strapped times.