By admin on February 3, 2013 in Other sport
BADMINTON: Double Olympian Scott Evans hopes to add to his collection of Irish titles when he plays in the Irish National Badminton Championships in Lisburn this weekend. Evans is in confident form after winning the men’s singles title at the Cyprus International in Nicosia last week. He had a tough match against Leinster champion Owen Marron in his opening match today (Sat) and if it goes according to the seedings, will face Tony Stephenson in tomorrow’s final.
Fellow Olympian Chloe Magee is top seed in the women’s singles and seeded to play Jenny King in the semi-finals and young pretender Sinead Chambers in the final. Magee and brother Sam are hot favourites to win the mixed doubles.
Top seeds for the men’s doubles are Tony Murphy and Tony Stephenson, who are likely to face Dan Magee and Niall Tierney in the final. Sinead Chambers pairs up with Jennie King in the women’s doubles.
Update: Scott and Chloe duly won their eighth and seventh consecutive Irish titles respectively. Chloe and Sam Magee  won the mixed doubles beating Tony Murphy and Jennie King in the final; Scott Burnside and Conor Hickland took the men’s doubles, beating top seeds Tony Murphy and Tony Stephenson, while Sinead Chambers and Jennie King beat Caroline Black and Rachael Darragh to win the women’s doubles.
WHEELCHAIR RUGBY: Although the Six Nations may have started,   wheelchair rugby takes centre stage next weekend when Gormanston College in Co Meath hosts a European Championships qualifier for the first time. Ireland have qualified for the main draw in the past and, after finishing fifth at the Rugby Mania tournament in Prague a few months ago, hope to finish top of the table. They take on teams from the Netherlands, Czech Republic and Italy, with the Dutch likely to be their greatest threat. Ireland is ranked 11th in Europe with the Dutch just one place behind. For the tournament, an Irish squad of about 30 players, men and women, was whittled down to the essential 12 after months of intense squad training with coach Neville Burrell. Captain is Alan Lynch, with wheelchair rugby pioneer Gareth Culleton also making the squad. Play starts on Thursday next February 7 when Ireland face the Czech Republic (6.15pm) and the Netherlands play Italy (8pm). On Friday, Ireland play Italy in the morning (11am) with their crucial match against the Netherlands taking place later in the day (6pm). Play-offs start on Saturday at 2pm. Entry to all matches is free, with the Gaelic Warriors hoping the home crowd will lift the roof off and see them safely through to the Europeans in Antwerp next August!
TABLE TENNIS: After her outstanding performance at the Stiga Munster Championships in Killarney, Hannah Lynch Dawson of Fivemiletown has moved to the top of the Irishwomen’s  table tennis rankings. Lynch-Dawson, who was the Irish cadet champion last season, beat Sabina Devereaux in the women’s singles semi-finals and UCD’s Sarah Timlin in the final in Killarney. UCD’s John Murphy remains top of the men’s table although he went out in the Munster semi-finals to Gavin Rumgay of Scotland. With just a month to go until the Nationals Championships, Lynch Dawson this weekend plays at the Fermanagh Senior Open in Fivemiletown College which started this morning (Sat). 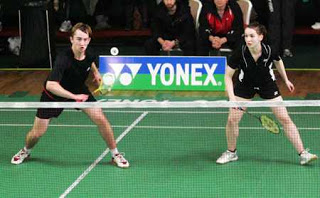 SQUASH: The ageless Derek Ryan underlined his fighting spirit when he won a thrilling men’s singles final at the Mount Pleasant Open in Ranelagh, Dublin. Ryan, who took his ninth Irish title last December, breezed to a 11-3 victory in the opening game against fellow veteran Steve Richardson. Only then did battle truly commence when Richardson came back strongly in the second to force a tie-break. Ryan won, but at a cost. It was all Richardson in the third game, and he then took the fourth in another tie-breaker after saving a match ball. In the deciding fifth game, Stephenson led at 6-3 before losing concentration and letting Ryan back ino the match. It was all square at 9-9, with Stephenson taking the next point and serving for the match. Ryan saved and went on to win the title.
In the women’s decider, Laura Mylotte beat Breanne Flynn in straight sets. Flynn, the No 14 seed, had put out top seed Griffin Gillanders in a tough semi-final.
RUGBY LEAGUE: Ireland’s Rugby League World Cup campaign has begun in earnest with a visit to the University of Central Lancashire in Preston where the squad will train during the competition. The university is the only Lancashire venue for the 14 nation tournament taking place in England and Wales. Opening matches are scheduled for Cardiff on October 26, with finals at Wembley. Ireland, coached by Mark Aston, face Fiji in their first match on October 28 at Rochdale.