By admin on July 22, 2013 in Canoeing, Hockey, Other sport, Paralympian sport, snooker, Triathlon 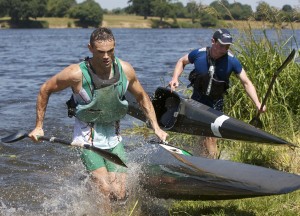 CANOEING: Update – Peter Egan duly won the K1 at the National Marathon Canoe Championships and then paired up with Gary Mawer to take his seventh consecutive K2 title (two of them with Neil Fleming; the rest with a number of different partners).

With defending champion Neil Fleming a doubtful starter, Peter Egan of host club Salmon Leap is favourite to win the men’s K1 title at the Irish Marathon Canoe Championships on Leixlip Lake today (Sat).
Last year, Fleming a member of Celbridge Paddlers, came to the championships having finished second at a World Cup event a few weeks earlier. He also won the K2 title pairing up with Egan. A few weeks later he moved to the USA to work as a college lecturer, with canoeing put firmly on the back-burner.

Egan went on to finish 17th at the World Marathon Championships on a tough 40km course and today’s course, at half that distance, shouldn’t trouble him. With his clubmate Tom Brennan away, his main rivals are likely to be Mick Brennan of Thomastown and his Salmon Leap clubmates Dermot Hudson and Gary Mawer. In women’s K1, Jenny Egan is in a class of her own. The K2 races take place tomorrow (Sun).

PARALYMPICS: Double Paralympians Jason Smyth and Michael McKillop lead a strong Irish team at the Paralympic World Championships already underway in Lyon, France. Smyth will go in both the 100m and 200m events in which he won double gold at London 2012. McKillop, who also won double gold at London 2012, competes in the 800m and 1500m. Other London 2012 medal winners competing are Catherine O’Neill in both the discus and the club throw and Orla Barry in the discus. London finalists Heather Jameson, who goes in the 100m, 200m and long jump and John McCarthy in the 100m and 200m are also selected along with Deirdre Mongan in the shot and Amanda Crotty in the 1500m. Last November, Crotty turned a lot of heads when she ran the National Intercounty Cross-Country with a guide.

HOCKEY: Ireland will play Wales in their opening match at the Women’s U18 EuroHockey Championships in Belfield on Monday week. The Irish, drawn in pool A, play hockey superpowers the Netherlands a day later and then have a day’s break before facing France. If they manage to finish second in their group, they will play the winner of group B, likely to be either Germany or England, in the semi-finals. Finals take place on Sunday August 4.

Meanwhile, an 18-strong men’s squad will play England, the Netherlands and host nation Germany at the Hamburg Masters taking place in Germany from July 25. The tournament is a final run-out before next month’s EuroHockey Championships in Belgium.

SNOOKER: Daniel Dempsey from Monasterevin came agonisingly close to making the last 32 at the World U21 Snooker Championships. In his match with Hong Kong’s Nansen Sin Man Wan, Dempsey lost the opening two frames, but fought his way back into the match to even the score at two frames apiece, and only narrowly lost the decider. Also through to the knock-out stages were Munster players Daniel O’Regan and David Cassidy.

TRIATHLON:Westport’s Con Doherty came second in the Junior World Cross Triathlon Championships, an unusual off-road competition held in the Netherlands. Doherty was in third place after the 500m swim and, after a solid ride on the 13km mountain bike stage, recorded the fastest run of the day to take silver by 18 seconds.

Dubliner Eoin Reville, who emigrated to Australia a few years ago, was best of the Irish at Challenge Roth in Germany, considered the fastest Iron distance triathlon on the calendar. Reville’s time of 9 hrs 4 mins 20 secs put his 16th in his age group . In all 33 Irish triathtletes competed at Roth, with five breaking the 10-hour barrier for the 3.8km swim, 180km cycle and 42.2km run.

Locally, Bjorn Ludick was a clear winner at the Carrick-on-Suir Sprint Tri, while Ian Farrelle was an equally clear winner of the Humbert Half in Swinford, completing the 1900m swim, 90km cycle and 21km run in 4 hrs 24 mins 31 secs. Tamara Maxantova was first woman in 4:49.57.