Marcus Lawler of IT Carlow produced one of the performances of the weekend at the Irish Universities Track and Field Championships at Santry when he smashed the colleges record to win the men’s 200m in 20.98 secs.

In the battle for second place, Kieran Elliott of UL edged out Christopher Sibanda of Limerick IT. Lawler also won the 100m in 10.56 secs; Jonathan Browning of QUB was second in 10.76 followed by Sibanda in 10.78 and 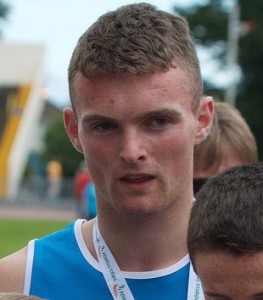 Over the longer distances, the star performance came from UL’s Michelle Finn who ran a solo race in the women’s 3000m steeplechase winning in a superb new record of 9 mins 54.88 secs. Over a minute behind for second was Jessica Coyle with defending champion Clare McCarthy of Trinity third. Winning a closely contested the men’s steeplechase in 9:44.36 was Brian Kirwan of CIT. Second was DCU’s Michael Carey in 9:44.55. Winning the men’s 10,000m was Colm Moran of UCD. Rachael Smith of NUIM won the women’s 3000m, beating Ellie Hartnett of UCD, while Keith Fallon won the men’s 5000m. In the women’s 5000m, Shona Heaslip from Tralee raced away form the field for victory. Trinity’s Sarah Fitzpatrikc was second.

In the field, LYIT’s John Kelly smashed the men’s shot putt record with a best of 16.16m, while Sarah Buggy of DCU took the women’s triple jump title with a leap of 12.63m. . In a weekend of close finished, Catherine McManus just held off her DCU team mate Lily Anne O’Hora for victory in the 100m hurdles, while Grainne Moynihan of DCU had a thrilling victory over UCD’s Aisling Drumgoole in the women’s 400m. Drumgooole had led for much of the race but paid the price for her blistering early pace.

SLIGO athlete Will Crowe proved the class of the field at the Ras UCD 5k, held around the Belfield campus. Crowe’s time of 15 mins 35 secs saw him finish comfortably ahead of Rathfarnahm’s Kevin Donagher, with Joseph Hastings of UCD third. First woman was Ciara Darker of DSD in 21.04.