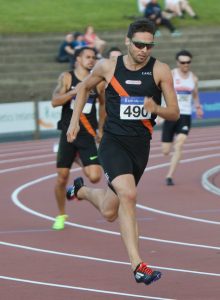 Clonliffe’s Brian Gregan is listed for the 400m at tomorrow’s Birmingham Diamond League meet, which means he will miss the Irish Life Health National League final in Tullamore.

Gregan, after running a lifetime best of 45.26 secs  earlier this season, is the third fastest entry in the race, which is not part of the Diamond League.  Topping the list is the American Vernon Norwood with 44.47 this season, while second is Kevin Borlee of Belgium, who has run 44.79 secs this season. Gregan’s race takes place at 15.32 and is live on the BBC.

At the Irish Life Health National League Final in Tullamore, where Clonliffe Harriers are the defending men’s champions, Mark McDonald will take Gregan’s place in the 400m. In the women’s competition, DSD are going for a seventh consecutive title, with St Abban’s likely to push them hard. Leevale AC have withdrawn from the competition.

LONG JUMPER Adam McMullen  of Crusaders AC  hit the Commonwealth Games standard for a second time at last Wednesday’s Manchester International, hosted by England Athletics, at the Manchester Sports Arena. His opening jump of 7.94m aided by a +2.4 wind, proved the winner; his final effort of 7.80m (+1.4) proved crucial, since it was his only one within the legal wind speed of 2.0m/s.

A Northern Ireland and Ulster team  took on teams from England, Scotland, Wales, Great Britain Juniors, Denmark and an International Selection. Mollie Courtney, who has already achieved a Commonwealth Games standard, led the field home in the 100m hurdles with a wind-assisted  time of 13.40 secs. The eam of Craig Newell, Ben Maze, Leon Reid and Andrew Mellon won the men’s 4x400m relay in 3:12.23, while in the 4x100m, the  team of Leon Reid, Christian Robinson, Adam McMullen  and Dean Adams missed the Northern Ireland record by just  0.01 seconds when taking 3rd  in 40.36.

MEGAN MARRS  of City of Lisburn  recorded a new 100m hurdles personal best at the LOTTO Warszawski Memorial Track & Field Meeting in Warsaw, Poland last Tuesday.  Her time of 13.51 secs (+0.1)was  just 0.06 off the Commonwealth Games 2018 standard of 13.45 secs.

London 2017: Some Random Thoughts
Laura Graham beats all the boys at Dam Busters ‘Half’