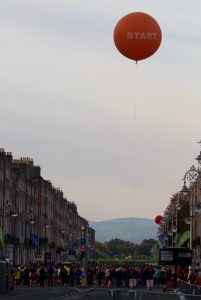 All 20,000 places for this year’s SSE Airtricity Dublin Marathon  on Sunday October 29 are now filled –  over three months before race date. Official closing date for the race was October 1.

Last year, when the race was moved to a Sunday for the first time, making the race an attractive option for overseas visitors, 17,500 places were originally allocated. By early August, all these were snapped up; an extra 2,000 places were made available and these were allocated on August 31. With 19,500 signed up, Dublin became the fourth largest marathon in Europe after Paris 40,801, London 39,200 and Berlin 28,000. Dublin was previously ranked eighth on the list. About 17,000 finished the race in Dublin.

Lifford-Strabane: the club that crosses borders
Euro U23: Irish in Action/Results