Mark Christie of Mullingar and Sligo’s Mary Cullen were the winners of the Terenure 5-Mile. Christie had to dig deep to hold off the challenge of DSD’s Brendan O’Neill for victory in 23 mins 52 secs. O’Neill was just one second adrift, with Freddy Keron Sittuk of Raheny thir 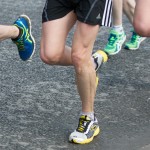 Cullen, in her first big race for some time, was eleventh overall in 26 mins 28 secs.  DSD’s Sarah Mulligan finished second in 27:52, with her DSD clubmate Fiona Clinton third in 28.56.

SWINFORD thrower Michael Walsh proved the athlete of the meet at the Glo Health AI Games when she won the hammer with a mighty throw of 58.87m.

AT THE LOUGHBOROUGH International, Clonliffe’s Jayme Rossiter again went under ten minutes for the steeplechase finishing third in 8:59.87. Sara Tracey of Dunboyne was second in the women’s 30000m in 9:08.81. Ben Reynolds finished third in the 110m hurdles in 13.91 secs, followed by Ger O’Donnell 5th in 14.10 secs. At Lagenthal in Switzerland, Daire Bermingham of Raheny ran 8:17.52 for third in the 3000m.

American based athletes were also producing fast times.  In Clermont, Florida, Lisburn’s Amy Foster opened her season with a 11.41 secs time for the 100m,  just one hundredth off the Irish Record she holds jointly with Ailis McSweeney. In the 200m, she ran 23.55 secs, with the help of a +2.1 wind. Colin Quirke threw 54.47  to win the discus. At the Hoka One One meet in Eagle Rock, Declan Murray ran 1:48.68 for 800m – the fastest time of the year so far. Leevale’s Ciaran O Lionaird  ran 3:41.04 for 10th in the 1500m. In Starkville a few days earlier, Dempsey McGuigan hurled the hammer out to 66.90m. Siofra Cleirigh Butter was running in Princeton, where she clocked 2:05.66 for 800m