Jenna Brommell of Emerald pulled off one of the performances of the day at the Glo Health National Junior and U23 T-F Championships in Tullamore when she won the junior 400m with a time of 54.26 secs. DSD’s Mollie O’Reilly was second in 55.52 secs – just off  a second world junior B qualification mark.

Winning the junior men’s title was Christopher O’Neill of North Sligo in 49.09 secs.

On a good day for North Sligo, William Crowe got the better of Mullingar’s Jack O’Leary in the junior 1500m, winning in 3:59.88 with O’Leary on his heels in 4:00.17. Emma O’Brien of Sli Cualann won the women’s race in 4:38.09, beating Aisling Joyce of Claremorris and DSD’s Sophie Murphy.

Battling all the way to the line in the junior women’s 100m final were St LOT’s Molly Scott and Ciara Neville of Emerald, with Scott just edging it in 12.02 secs. In the junior men’s 100m, Donore’s Sean Lawlor with a time of 10.84secs beat Tallaght pair Joseph Ojewumi and Eoin Doherty. Over 200m, Sharlene Mawdsley of Newport AC was the winner in 24.04 secs; second was multi-eventer Elizabeth Morland of Cushinstown, who earlier had won the high jump. Galway’s Cillian Green won the junior men’s 200m in 21.78 secs. 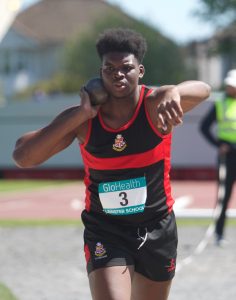 Making it a double in the junior shot and hammer was Swinford’s Michaela Walsh, who threw 15.06 m in the shot and 55.85m in the hammer. In the men’s shot (6kg), Anu Awonusi of StLOT pulled out a superb throw of 16.89m to beat Finn Valley’s James Kelly. Four of Awonusi’s throws were over 16 metres. Kelly’s older brother John won the U23 title (7.2kg) with a 15.67m effort. He also finished third in the discus.

Another double winner was Shane Joyce of Cushinstown, who won the junior triple jump with a leap of 13.43m and the javelin with a 57.89m throw. Final races of the day were the 4 x 100m relays, with DSD winning the junior women’s race in 50.73 secs. Winning the U23 triple jump was Saragh Buggy of St Abban’s who now has a clean sweep of all the indoor and outdoor titles – including senior – available to her.

ENGLISH VISITOR Lee Emanuel won the mile at the Letterkenny  in the only sub 4-minute time of the night. His time of 3:59.66 saw him beat Robbie Fitzgibbon whose was timed at 4:00.14. Best of the Irish was Kevin Batt of DSD in 4:04.31. A minute behind in 4:05.79 was Donore’s John Travers.  The pair are heading for the European Championships next week. Winning the 100m in 10.52 secs was Josh Swaray of Senegal; in the women’s 800m, Kelly Neely of Lisburn clocked a time of 2:08.42 for seventh place. Petr Frydrych of Czech Republic put on a display of top-class throwing in the javelin, winning with a 84.10m effort.

SARAH MCCORMACK produced the best Irish result  at the European Mountain Runnign Championships in Arco, Italy when she finished 15th in the women’s race. Not far behind her were Laura Shaughnessy 18th and Sonya McConnon 29th which meant the Irish team finish fifth.  In ghe men’s senior race over 12km, Briann McMahon was best of  the Irish in 33rd place. Up front, twin brothers Martin and Bernard Dematteis made it a 1-2 for Italy , finishing together to clock 53 mins 33 secs and 53 mins 34 secs respectively.

FREDDY SITTUK and Norah Newcombe Pieterse were the winners of the Achill Half Marathon.