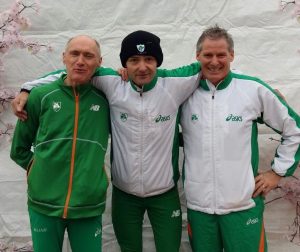 Brian Lynch of North East  Runners and Mark O’Shea of Drogheda and District took 1500m gold on the final day of competition at the World Masters Indoors in Daegu, South Korea.

Both men were taking their second wins of the competition having won  3000m titles earlier in the week.

First up was Lynch in the M60 final where he was taking on Ryzard Dryps of Poland, Oleksandr Lysenko of the Ukraine and his team mate Joe Gough. It ended up as a two way battle between Lynch and Dryps, with Lynch  pulling away in the straight to win in 4 mins 42.31 secs. Dryps clocked 4:43.73 while Gough came through for third in 4:49.08. Lysenko, who had finished second behind Gough in the 800m, was fourth in 4:58.95.

Finishing second W75 was Ann Woodlock of Donore, whose time of 7:9.33 would have seen her  finishing third W70. It was a second medal for Woodlock, who earlier in the week, won the 3000m. 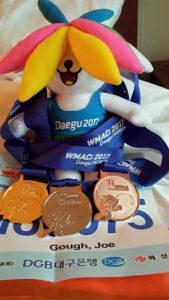 There was a final medal for Ireland in the 4 x 200m relays that rounded out the competition – and again it was in the M55 age group. Not at all exhausted by their earlier efforts, the quartet of Joe Gough, Brian Lynch,  Tom O’Connor and Michael Cornyn took silver  in 1:58.02 behind a rampant GB team that finished in 1:58.08. Third was the USA in 2:00.30.