Track: Irish Aim for Top 5 in Tallin. Plus League Standings going into Rd 2 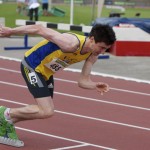 Batt’s parents are both from Dublin and emigrated to Australia 24 years ago. He will make his first Irish appearance  at next month’s Cork City Sports. In Tallin, he will come up against a field led by Belgium’s Keone Naert who has run 13:32.83 this season, with Estonia’s Tiidrek Nurme  another threat.

On paper, Ireland could certainly do well.  Thomas Barr is by some way the class of the 400m hurdles field,  while Mark English  in the 800m also looks a safe bet for maximum points. In the 1500m, Paul Robinson takes on Jeroen D’hoedt of Belgium, and in the 400m, Brian Gregan could well repeat his heroics of last year. Although Gregan hasn’t raced much, of the expected field in Tallin, only Jonathan Borlee of Belgium, with a time of 44.54 secs, is faster than him this season.

If he runs to form, Tomas Cotter could make the top three in the steeplechase, while David McCarthy in the 3000m and Adam McMullen in the long jump should also make the top six at least.

Fionnuala Britton faces a tough battle in the women’s 5000m, with Belgium’s Almensch Belete running on her favourite surface and old rival Ana Dulce Felix running for Portugal. Laura Crowe has a good chance in the 1500m, where she is second only to  Norway’s Ingvill Makestad Bovim in the rankings.

Bovim is one of four sub-2-minute runners in the 800m, where Rose Anne Galligan, who has a PB of 2:00.07 from last year, carries Irish hopes. In the pole vault, Tori Pena should repeat her second place of last year; only the Greek Ekaterini Stefanidi has gone higher this season, with a vault of 4.60 compared to Pena’s 4.45m.

Sarah Lavin is making steady improvement in the 100m hurdles but will need to improve on her personal best of 13.23 secs to make the top three. The same goes for Amy Foster in the 100m and Kelly Proper in both the 200m and long jump.

In other events, Christine McMahon could pick up points in what looks like a pretty open 400m hurdles, once Portugal’s Vera Barbossa and Romania’s Angela Mososanu are  discounted. So also could Kerry O’Flaherty in the steeplechase whose time of 9:52.93 ranks her fourth of the field. Strong performances from the relay teams,  who have European Championships  qualification in their sights, would  also boost the Irish points total.

Ireland finished a best ever seventh in Santry last year and have high hopes of an even better performance this time, with top five the target. The top three teams gain promotion to the Super League.

AT HOME,  the second round of the National Track and Field league takes place in Athlone and Santry on Sunday. Defending women’s champions DSD  topped the table after the opening round last month and look safe for a place in the final on August 3. Crusaders, who won the men’s premier title last year, will struggle with most of their top names away on European duty in Tallin. If memory serves, they will get a free ride to the final so long as they turn up in Santry on Sunday (open to correction here).
St Abban’s top the table after the first round on 124 points with Clonliffe, the 2013 champions, just one point behind. Crusaders  languish in equal 13th place with Raheny Shamrock. Top eight after Sunday go through in both divisions. Lists below.