Mark Smyth and Michael Farrelly made it a sprint double for St Fintan’s Sutton at the opening day of the North Leinster Schools Track and Field Championships held in freezing cold conditions at Santry today.

Smyth won the senior boys’ title in some style, beating Luke Redmond from Ashbourne College, who later had an impressive victory in the senior 400m. 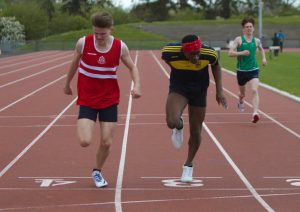 Farrelly who is the national indoor 60m, 200m and long jump champion for his age group took the junior title for a second year. Winning the inter boys’ race was James Redmond of Ashbourne College, with Rodrigues Milamibua of Dunshaughlin CC in second place.

Diarmuid McKeon of St Joseph’s Rochfortbridge won a competitive senior boys’ 1500m, where he was followed home by St Aidan’s pair Greg Hosseny and Sean O’Leary with Jarlath Jordan of Dunshaughlin just out of the medals.

At inter level, Ruarcan O Gibne of Colaiste an Lu got the better of Craig Giles from Portmarnock CC, while coming out on top in the junior 1500m was Seanie Dalton of Malahide CS. Class of the field in the senior steeplechase proved to be Philip Marron of Ratoath CC. 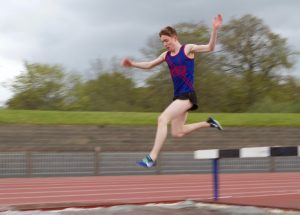 Winning the U16 mile was Dora Medgyesy of St Dominic’s Cabra, with Ruby Pereira of Loreto Balbriggan second. Aaron Cullen of Portmarnock CC won the boys’ U16 mile.
In the field, multi-eventer Kate O’Connor of St Vincent’s Dundalk opened her season with a winning throw of 44.43m in the inter javelin. There was another impressive performance in the inter girls’ discus won by Niamh Fogarty of St Joseph’s Rochfortbridge with 40.53m.