* Ciaran O Lionaird  of Leevale finished eighth in a tactical mile at the Drake Relays, clocking a time of 4.03.64. It was a first race for O Lionaird in a year.  In Florida, Richard Morrissey  of Crusaders  ran a personal best of 10.81 secs for the 100m as well as clocking 21.47 for 200m  and 46.83 for his specialist 400m at the Spring Invitational Meeting in Clermont. Lisburn’s Amy Foster was also competing in Florida where she ran a wind-assisted 11.38 secs in the 100m. In the heats, Foster ran 11.50 secs.

* Jason Harvey  of Crusaders  finished 4th in the 200m with a time of 22.19 secs at the UCSD Triton Invitational meet in San Diego. Harvey  has a Commonwealth Games standard for the 400m hurdles.

* In Dublin, Kenyan visitor Peter Brandon Somba won the Samsung Night Run 10km around Dublin’s Docklands in 30 mins 9 secs, beating Raheny’s Mick Clohisy by just two seconds. A distant third and first M40 was Lezan Kimutai from Kenya in 32 mins 31 secs, with Kevin Baker a second behind for fourth. Siobhan O’Doherty of Borrisokane was first woman in 35.39, followed by Raheny’s Maria O’Sullivan second in 36 mins 10 secs and Paula Grant Grant third in 39:27. In Cork, Clonliffe’s Sergiu Ciobanu was the winner in 30 mins 40 secs, with Orla Drumm of Crusaders fourth overall and first woman in 35 mins 30 secs. Over 5,000 (5,038)  took part in the Dublin race and a further 1,019 in Cork. Full results at www.chiptiming.co.uk or via the Samsung Run website.

* Blast from the past corner: Anyone remember triple jumper Samuel Okantey, an athlete from  Ghana  who switched his allegiance to Ireland (mother from Mayo) in 2002? His finest moment had come in 2000, when he finished second in the African Championships and qualified for the Sydney Olympics. In 2002, Okantey set a disputed Irish record of 17.19m; in the fall-out, his agent Paul Doyle dropped him from his books. Well, Okantey, now aged 40, is back competing and jumped 15.80m in Louisville, Kentucky, at the weekend. But is he still Irish?

OTHER SPORTS (A lot happening this weekend) 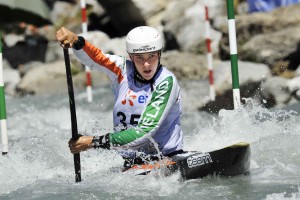 IRISH paddler Liam Jegou has taken silver in the men’s C1 at the Slalom Junior World Championships in Penrith, Australia.
After qualifying for the finals in sixth place, Jegou went on to finish second in the final, just losing out to Germany’s Florian Breuer. Jegou, who has an Irish mother and a French father, first learned to paddle in Galway, before emigrating with his family to France.

The young Irishman, aged 18, has a good record in this competition – he finished fourth in 2012 and sixth last year. Jegou won his first international competitions in 2010. His aim is to qualify for the Rio Olympics. 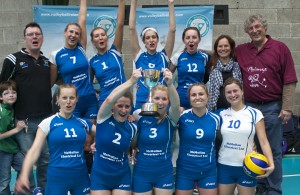 DUBLIN Volleyball Club’s  women  beat Santry to win the Association Cup in a thrilling final at UCD Sports Centre. It was a memorable double for DVC who nailed down the league title a month ago.  DVC had also made the men’s final for the first ever time, but after a brave battle went down to defending champions Ballymun Patriots. This proved a gloriously sporting match, with the teams applauding each other after it was all over. 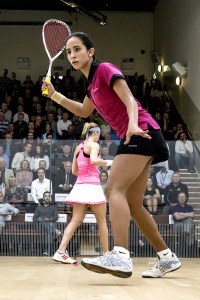 Waller only beat beat Alan Clyne of Scotlland after a 96 minute slug-fest with the final score standing at 11/8, 10/12, 8/11, 11/7, 11/6.
Gohar, aged just 16, beat Sarah Kippax  of English easily enough, although she did drop the second game. Final score was 11/3, 8/11,11/8, 11/5.
Irish interest in the tournament ended when Arthur Gaskin went out to Clyne in the semi-finals. Madeline Perry who was the top seed, and Aisling Blake both failed to progress from the quarter-finals of the women’s tournament.

TOUGH DRAWS draws meant early exits for the Irish at the European Badminton Championships in Kazan, Russia. Scott Evans beat the Serbian Ilija Pavlovic in the opening round, but went out to the No 4 seed, Victor Axelsen in round 2. Chloe Magee , seeded No 7, had a bye into the second round, but took three long sets to beat Swiss player Sabrina Jaquet but then went out in round 3 to the unseeded Stefani Stoeva of Bulgaria. Chloe and Sam Magee had the misfortune to draw top seeds Joachim Fisher Nielsen and Christinna Pedersen of Denmark in their second round match and lost in straight sets. Sam Magee and Jonathan Dolan a closely-found opening match against Jacco Arends and Jelle Maas of the Netherlands in the men’s doubles. In the women’s doubles, Sinead Chambers and Caroline Black, who will play in the Commonwealth Games later this summer, lost their opener to English pair Gabrielle Adcock and Lauren Smith.