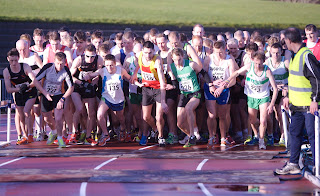 Tallaght’s Tomas Fitzpatrick  and Kerry Harty of Newcastle were comfortable winners of the ERP Clonliffe Christmas Cracker 5km startong on the Santry track and taking in a loop of the neighbouring roads.
Fitzpatrick pushed the pace from the start and was out on his own  at halfway with Eddie McGinley of Annadale and Clonliffe’s Dave Fitzmaurice battling it out for second place,  with Raheny’s Simon Ryan, Emmett Dunleavey of Sligo and Michael Mac Diarmada of Clonliffe not far off the pace.
Fitzpatrick came into Santry stadium on his own and finished in 14 mins 42 secs. McGinley was second, with Dunleavy pacing it well to finish third ahead of Ryan and Fitzmaurice.
Kerry Harty proved the class of the women’s field finishing in  16 mins 50 secs, comfortably clear of Raheny’s Elish Kelly and Teresa McGloin of Finn Valley.
Many clubs had used the race as their weekend outing, with large groups from Drogheda and District, Crusaders, Raheny Shamrock, Skerries and the host club Clonliffe. Winning the 32′ TV is the draw among those who brought along electrical goods for recycling was Skerries junior Rhona Pierce. Pics at www.lindie.zenfolio.com.
* Double European cross-country champion Fionualla Britton  was in action at the Wicklow Cross-Country Championships today, winning the women’s race from sister Una, who ran in the U-23 race in Budapest.