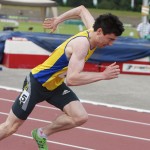 Paul Robinson finished fourth in a dramatic 1500m while  the Irish men’s 4 x 400m team set a new national record at the final session of the  Europeans Championships in Zurich.

In the 1500m Ciaran O Lionaird was tripped from behind  on the second last lap. There were two more fallers on the last lap. Robinson stayed out of trouble and finished in 3:46.35.

In the 4x400m, the Irish men were fifth in 3:01.67, with Thomas Barr the anchor man and Mark English running the second leg.

Sean Hehir ran a well-judged race to finish 20th in 2:17.59 in the men’s marathon. Hehir started cautiously and at 10km,  was lying  39th in a packed field. He then started picking up places and, between 30km and the finish, had moved from 30th to 20th place. At 40km, he was 19th but he lost one place in the final stretch of the race.

At last there was a medal for the Irish team at the Europeans on Friday night when Mark English ran a smart race to finish third in the men’s 800m. His time of 1:45.03 equaled his season’s best. Polish athletes Adam Kszczot and Artur Kuciapski  finished first and second.

In  the men’s 4 x 400m relay heats, Brian Gregan, Brian Murphy, Richard Morrissey and Thomas Barr all ran out of their skins to finish third in a new Irish record of 3:03.57. This time ranked them sixth overall going into the final.  The Irish women’s 4 x 100m quartet, finishing fourth in their heat and 10th overall, were also in record breaking form with a time of 43.84 secs.Unfortunately it was not enough to make the final.

Earlier on Saturday,  Fionnuala Britton finished 10th in the women’s marathon in 2:31.46 – the fourth fastest Irish time ever. Sarah Mulligan was 36th in 2:42.43 and Barbara Sanchez 41st in 2:43.59, with the team 7th. Winner was 39-year-old Christelle Daunay of France who ran a championships best time of 2:25.14 on the tough and hilly course.

Paul Robinson and Ciarain O Lionard both qualified for the 1500m from Friday’s heats. Going in the second heat, Robinson came from behind to finish fourth in 3:39.83 , nailing down an automatic place. In a blanket finish to the opening heat, O Lionard finished seventh in 3:39.79, enough for a fastest loser’s place.  John Travers was 14th in 3:49.73.

Earlier, Robert Heffernan dropped out of the 50km walk  just before the 40km mark when he was lying  sixth. At 20km, reached in 1:27.21, he was fourth; at 30km,  reached in 2:11.01, he was fifth. With any chance of victory now gone, he opted to quit; a decision he may well come to regret.  The winner 36-year-old Yohann Diniz from France pushed the pace from the start and set a new world record of 3:32.33 – over five minutes quicker than Heffernan’s PB  of 3:37.54 from the London Olympics.The previous world record was 3:34.14. It was a third European title for Diniz.

Kelly Proper ran a personal best 23.12 secs to finish fifth in the 200m semi-finals on Thursday evening – not enough to see her through to the final, but still a great run especially since she was drawn in lane 8.

Mark English finished fourth in his 800m semi-final in Zurich on Wednesday,  with his time of 1:46.23 enough to nail down a fastest loser place in Friday’s final.

On the same evening, Thomas Barr failed to progress from the second semi-finals of the 400m hurdles, delayed after stormy conditions in Zurich. Barr was carrying a groin injury and although trailing coming into the last hurdle, made a tremendous effort to finish third in his heat. At that point, he had the second of the two fastest loser slots on offer but the last semi-final proved to be the quickest and so Barr lost out.

Also failing to progress from the 400m semi-finals was Brian Gregan, although he ran a  season’s best time of 45.81 secs. 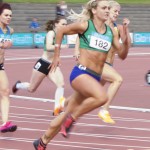