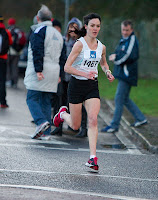 Sligo’s Mary Cullen showed that she is right back in form when she won the women’s race at the Woodie’s DIY National Interclub Cross-Country Championships in Tullamore.
Cullen pushed the pace from the start and had soon shaken off the challenge of defending champion Linda Byrne of DSD, the only athlete who attempted to stay with her. With two laps to go, Cullen was 15 seconds ahead and she extended that lead to half a minute on  the final lap in a dominant display of front running.
Byrne finished second with Breege Connolly  of North Belfast Harriers in third place. For the first time in 42 years, Raheny Shamrock won team gold, beating DSD and  Clonliffe.
In a men’s race lacking some of the promised big names,  Sergiu Ciobanu of Clonliffe deservedly won his first national cross-country title after coming second last year.  Finishing a fighting second was Joe McAllister  of St Malachy’s while third, who had pushed Ciobanu hard throughout the race.  Eoin Flynn of Rathfarnham WSAF who had returned specially  from his home in the Canary Islands was third. Clonliffe – again – took the team title ahead of Raheny and Rathfarnham, despite the late withdrawal of both Alistair Cragg and Mark Kenneally from the team on Thursday.  Making up the winning team (along with Ciobanu)  were Michael Mac Diarmada  8th, David Flynn 11th, and Gary O’Hanlon 16th. Dublin clubs finished top three in both senior men and women’s  races.
Sean Tobin of Clonmel won the junior men’s race from Hugh Armstrong and Ian Guiden of Clonliffe.
In the absence of Siofra Cleirigh Buttner,  her DSD clubmate Sarah Fitzpatrick won the junior women’s race,  setting a fast pace from the start and holding off the challenge of her fast-finishing team mate Isabelle Odlum in the chase for the line. Ferrybank’s Orna Murray was third and . DSD won both junior men and women’s team titles.
* At the Seville Marathon, Barbara Sanchez of Raheny Shamrock  and the Marathon Mission ran a time of 2:37.14.

* Six days of hectic “indoor” competition ended for Dublin Juveniles in Santry today, with some very good performances. Huge numbers in all events put considerable strain on the timetable – a good complaint. Well done to all who took part!
* Close to 1,100 men from in 79 teams took part in the men’s race at the English Cross-Country “Nationals”, one of the great traditional races on the athletics calendar.
Winner was Keith Gerrard in 41 mins 21 secs; the last finisher came home over an hour later! In the women’s race, an entry of 427 and 46 teams was led home by Louise Damen. There were also junior, U17,15 and 13 races, all attracting well over a hundred runners each(200 in the case of the U15 and U13 races). Maybe it’s time to get rid of the inter and novice national cross-county races here and have two big cross-country days with all active club members encouraged to take part?