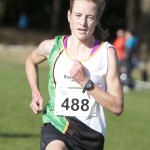 Cross-Country in Holyrood Park. Running even better was Gemma Steel who was runner-up behind Sophie Duarte of France at the European Cross-Country and was beating Britton for only the second time.

Britton, along with British junior Emilia Gorecka, pushed the pace from the start of the 6km race. Also in the leading pack on the first of three 2km legs were Steel, Charlotte Purdue of Team GB, Duarte and the Ethiopian Almensh Belete who runs in Belgian colours. Ireland’s Sarah Treacy was 13th.  Midway through the first lap, Duarte moved to the front but was quickly swallowed up and failed to feature for the rest of the race.

On the second lap, Gorecka and Steel were dictating matters up front, with Britton and Purdue battling it out for third place. At the bell, reached in 13 mins 41 secs, Steel  began to pull away from a fading Gorecka, with Britton in third place chasing hard. She caught and passed Gorecka in the final kilometre.

Steel was a comfortable winner in 20 mins 35 seconds with Britton nine seconds adrift in second and Gorecka seven seconds behind again. Duarte made up some ground to pass Purdue and finish  fourth. Six of the top 10 came from Britain.

In the men’s 8km, Michael Mulhare finished an excellent fourth in a race dominated by the American Chris Derrick, who trains with Mo Farah at Team Nike in Oregon. Britain’s  much-improved  Andy Vernon ran a determined race to finish second ahead of Bashir Abdi, the Ethiopian who runs in Belgian colours. David McCarthy  finished 11th, just 17 seconds behind his  training partner Mulhare and was part of the winning “Team Europe”.

After four events, just 29 points separated Lagan Valley’s Laura Frey and Karen Dunne of Bohermeen  in the senior women’s  competition.  It all came down to the 800m, with Frey’s gutsy run giving her victory with  an overall score of 2,869 points. Dunne finished second on 2, 821 points and Sarah Mesloh third on 2, 548 points.

Equally close was the junior women’s category, with Sarah McCarthy  of Mid- Sutton’s time of 9.13 secs in the hurdles and  5.73m long jump enough to seal overall victory with a score of 3,572.  A close second on 3,372 points was Belgooly’s Grace McKenzie who cleared 1.70m in the high jump.  Amy McTeggart  of Boyne   finished third with a score of 2,749 points.

Mark Rogers of St Peter’s  was a comfortable winner of the men’s junior title with 3,175 points. Highlights were his 1.85m high jump and runaway win in the 1,000m.  Donal Kearns  of Cushinstown  was second with  2,601 points.

On a good day for Cushinstown, Keith Marks made it a youths double for the Meath club  when he won the men’s title with  3,277 points.