Dubliner Fred Dinsmore is the double European champion after winning both 8-ball and 9-ball titles at the European Pool  Championships wheelchair title in Slovenia.  In the 8-ball final, Dinsmore beat world 9-ball champion Henrik Larsson of Sweden 5-3. Earlier in the week, Larsson has beaten the Dubliner 5-4 in the 10-ball competition.

In the 8-ball semi-final, Dinsmore had a tough outing against British player Tony Southern, winning 5-4 after pulling back from 3-4 down. he then moved on to the 9-ball competition and despite a set-back when he lost to Southern, still made it through to the final. 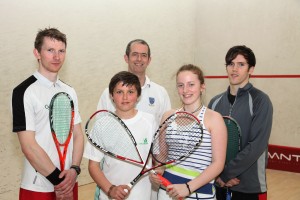 Ireland’s Madeline Perry and Aisling Blake seeded to clash in the semi-final of the women’s tournament at the Cannon Kirk Irish Squash Open women’s tournament in Dublin’s Fitzwilliam Club next week. With four previous wins to her credit, Perry is top seed, while Blake is at No 3. At the recent Irish Nationals, Blake beat Perry to win her first Irish title.

Other seeded players are Emily Whitlock, who is likely to face Samantha Teran of Mexico in the other semi-final. Top seeds in the men’s draw are England’s Chris Simpson and Mohd Nafiizan Adnan from Malaysia. Play begins with the qualifiers draw on Mon and Tuesday next with finals on Saturday. Entry is free and spectators welcome.

Uncapped players Daniel Buser, Matthew Rollins and James Lorimer , all Ulster, have made the 30-man squad for next June’s World League 3 tournament in Rotterdam, with World Cup qualification at stake. Not available are experienced players John Jermyn and Mitch Darling. Dublin club Monkstown has five players on the panel, while both Peter Caruth, who plays his club hockey in Belgium and Timmy Cockram of Lisnagarvey are back. The final selection for Rotterdam will come from this group.
In Rotterdam, the Irish initially play in a pool of four to be selected from Australia, Netherlands, New Zealand, Spain, India and Ireland, along with the winner of the upcoming World League 2 tournament in France and the highest ranked second place team from the French or Russia World League 2 competition. The tournament runs from June 13-23.

In addition, extra players have received the call-up for regional sessions in Belfast and Dublin in preparation for the European Nations next August.

David Hogan made his first competitive 147 at the Talbot Snooker Classic – the seventh senior ranking tournament of the season,  held in the Ivy Rooms Carlow. Hogan was playing Martin Ruddy when he made the 147; in the following frame, he made a 143 clearance.

Earlier in the week, Hogan had cleared the table for a perfect 147 in practice, bringing his total in practice to 12 . The last Irish snooker player to make a maximum 147 in a ranking tournament was Rodney Goggins, playing Brendan O’Donoghue.

Coincidentally, it was O’Donoghue who went on to win last weekend’s tournament, beating Goggins in the semi-finals and John Sutton in the final. Sutton had put out David Hogan  in the quarter-finals.

A small Irish squad picked up a fistful of medals at the British Spring Canoeing Championships in Nottingham.  In the paracanoe k1 200m race, Patrick O’Leary of NUI Galway finished second. Also second was the pairing of Peter Egan and Maciej Majchrzak from Salmon Leap in the K2 200m. Tom Brennan, also Salmon Leap, finished third in the U23 K1 200m and was fourth in the K1 1000m.

A showdown between Clondalkin-based Dublin Volleyball Club and Santry today will decide the outcome of volleyball’s premier league title. Although DVC started the season well, the momentum has swung Santry’s way since an early season loss to Naas Cobras in November. A month later they took the scalp of DVC and remain unbeaten since then. As it stands, the two teams are locked at the top of the table on 29 points, with Santry leading on set difference. To win the title for the first time, DVC, who suffered an Association Cup loss to Trinity a fortnight ago and have injury worries, must win today. In the men’s premiership, Aer Lingus only have to beat UCD today (Sat) to take the title. By contrast, UCD must win today’s match 3-0 if they are to snatch the title.

Update: UCD won a thrilling match 3-2, but Aer Lingus had the two sets they needed to take the league title. And Santry beat DVC to take the women’s title.

Returning to Ireland for coaching sessions next month is Lee Jae Bok, the former English national coach who worked with Olympians Chloe Magee and Scott Evans in the run-up to the London Olympics. Lee will conduct coaching sessions for ambitious players of all ages in Baldoyle Badminton Centre and Galway LTC from May 6-10.