Aer Lingus and Santry Volleyballers Both On the Double! 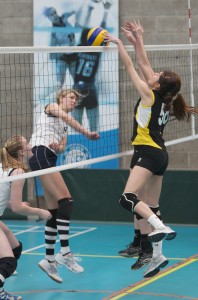 In the men’s cup final, Aer Lingus beat Ballymun Patriots in a five set epic.  The Alsaa team, winners two years ago, battled hard to win the opening and then went two sets up. They  looked like closing out the match in the third, but  Ballymun, whose serving had been weak, stormed back to take the next two sets  so forcing the tie-breaker. This was nip and tuck until the end when Aer Lingus found the two points they needed.

In the women’s decider, Santry, who won this title a few years back, were facing a formidable Trinity team that has had steadily improved all year and dumped out the title holders DVC in the semi-finals.

Santry started nervously knowing that they were on for the first league cup double in the club’s history and although honours were shared form much of the set, Trinity closed it out at 25-21. Santry started the second set in a more determined frame of mind and despite superb play and long rallies from both teams,  soon had a edge they kept until the end. Pics at www.lindie.zenfolio.com

Madeline Perry won a fifth women’s title at the Cannon 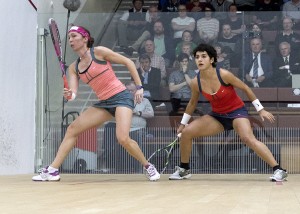 After close to 2,000 matches, the Dublin and District Badminton leagues came to an end on Sattuday, with Pembroke beating Mount Pleasant to take the Division 1 mixed title.

Match of the day saw Boyne  beating Old Bawn by a single point to take the Division 3 title after the teams were tied on games and sets.  Boyne also won the Division 4 title, beating PSLC  in the last mixed game of the match – and the last game of the Dublin and District Session for 2012/13, finishing just before midnight.

Wining the Club of the Year award, renamed the Cormac Breslin Perpetual Trophy in memory the late Cormac, one of Ireland’s few Olympic-class umpires, was  Ailesbury Badminton Club.

Sycerika McMahon won  the 200m individual medley for a sixth title on the final day at the Carlton Irish Swimming Championships. Ealeri in the competition, McMahon had won the 400m individual medley, 100m, 200m and 400m freestyle and 200m butterfly.

Limerick swimmer Fiona Doyle added the 200m breaststroke  to the 100m breast stroke title she had won a day earlier.  In the 100m race, Doyle knocked .14 of a second off Sycerika McMahon’s 2012 record  with a time of in 1:08.23 – enough to qualify her for the  World Championships in Barcelona next July.
Just half a second outside the  World Championships mark on Saturday was Barry Murphy who won the men’s 100m breaststroke  in 1:01.35.
In the relays, UCD (Aisling Cooney, India McGlynn, Shauna O’Brien and Shani Stallard) improved on their own senior record of 4:23.48 in the women’s 4x100m medley relay.  Bangor set a new junior  beat of 4:28.74 in the same race, while Ards set a new junior Irish record of 3:56.15 on their way to victory in the men’s 4×100 medley relay.

Irish Team 5th at Penn Relays plus PB for Dooney
Coghlan, Talty the Winners at Dublin by Night10km