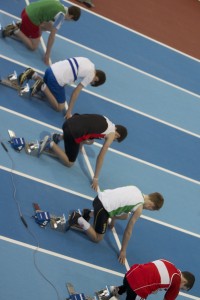 At the World Masters Indoors in Daegu,Korea today, the Irish men’s over 40 and over 55 teams both took gold.

First up on the 8km course were the over 55 men, with Tom O’Connor of Liffey Valley finishing a fighting fifth, Pat O’Grady of Drogheda and District 6th and Michael Cornyn of Dunboyne AC 12th. It was enough for a cumulative time of 1 hr 36 mins 31 secs, which saw off the Italians who had two finishers in the top four but finished with a total of 1:43.48.

In the M35 race, Ronan Kearns  finished third, while his Rathfarnham teammate Paul Fleming  finished sixth and Sean McDermott ninth in a fiercely competitive M40 race, dominated by a trio of Spaniards. Ireland finished best of the M35 teams with 1 hr 26 mins 26 secs, followed by Czech Republic 1:27.27 and Great Britain 1:28.23. The Spaniards were first M40 team with a startling total of 1:20.53, by some way the fastest of the day.  Finishing sixth in the M45 race was Ian Egan from Tuam. No Irish women were running, although ex-Raheny Shamrock Patrycja Wlodarczyk,  back in her native Poland for a couple of years now, won the W35 race.

Ireland’s medal rush had begun in the W50 high jump where Sibeal Murray took  bronze when she went over the bar at 1.44m. One place behind her for fourth was multi-eventer Geraldine Finnegan of NER on 1.42m.  Another silver medal went to John McMullin who was second in the M70 3000m walk, while bronze went to Pat Murphy 3rd M55 3000m walk. A day earlier, Anne Gormley of Donore Harriers had finished fourth in the W50 3000m walk.

Safely through  to the M55 60m final is Shane Sheridan who won his heat with a time of 7.97 secs and then finished third in his semi-final in 7.88 secs – the seventh fastest time of  the eight who qualified for tomorrow’s final, where Sheridan goes in lane 1.

Also in action tomorrow is Joe Gough who begins his defence of his M60 800m title, and Geraldine Finegan in the W50 800m.