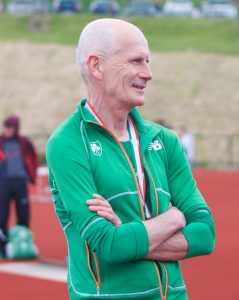 Brian Lynch of North East Runner has successfully defended his title in the M60 3000m at the World Masters Indoors in Daegu, South Korea.

Lynch won the race in 10 mins 34.81 secs, giving him four seconds to spare on Britain’s Paul Thompson who finished in 10:38.68; the two were well clear of the field.

There were also three silvers for Ireland – Snezana Bechtina of Clonliffe Harriers was second in the W35 200m in 25.75 secs, which broke her own Irish record set in the heats; winner was Caroline Garcia Garzon in 25.11 secs. In the M55 200m, all the hard work paid off for DSD’s Shane Sheridan who finished second  behind the American William Yelverton in 25.44 secs; Yelverton ran a time of 24.82 secs. Third was Britain’s Neil Tunstal 25.64 secs.

Finishing second in the W50 800m was Geraldine Finegan of North East Runners in 2:35.41. Finegan was also second in the triple jump. She goes in the 60m hurdles final (heats were cancelled)  and her specialist pentathlon tomorrow. Shane Sheridan competes in the M55 400m heats;  Anne Gormley W50, Pat Murphy M55 and John McMullin M70 go in the 10km walk. Big events on Saturday – the final day of competition – are the half marathon, 400m and 1500m finals and 4 x 200m relays.