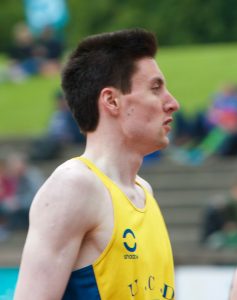 Mark English – back in action

In his first race for some time, UCD’s Mark English finished fourth in the 800m at the Boston Boost meet yesterday. His time of 1:46.06, though well off his personal best of 1:44.84 run in 2013, was am encouraging start to his season. Qualifying mark for the World Championships is 1:45.90.

Clonliffe’s Brian Gregan  was one of a number of Irish athletes in action today at the Putbos Memorial in Belgium.

Christine McMahon of Ballymena was in action at a meet in Marseille, France where she clocked 58.15 secs for  fifth in the
400m hurdles.

ON THE ROADS, Clonliffe’s Dave Flynn ran 66 mins 31 secs at the San Diego Half Marathon in the USA,

Last call for The Relay!
Neville, Mawdsley and Walsh all smash records at All Ireland schools