Michaela Walsh of Swinford  took bronze in the women’s hammer  winning Ireland’s second medal at the European U20 Championships  in Grosseto, Italy today. 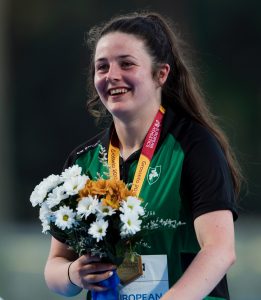 Walsh’s throw of 62.17m was marginally less than the 62.33m she threw in qualifying but still enough for a comfortable third place. She also finished seventh in the shot put with 15.62m.

In the men’s 400m final, Christopher O’Donnell of North Sligo finished sixth in a new Irish U24 record time of 46.54 secs. Clocking a personal best time of  21.36 secs for sixth in the men’s 200m was Mark Smyth of Raheny Shamrock.

EMMA MITCHELL of QUB took her first national senior title when she won the women’s 5000m on the opening day of the Irish Life Health National Track and Field Championships in Santry.

Annmarie McGlynn of Letterkenny took the lead from the start with national cross-country champion Shona Heaslip of Riocht on her shoulder and Mitchell tucked in behind them both. Along with Aoife Cooke of Youghal, the trio broke away from the field early on and it was only on the final lap that Mitchell took over in front and came home for a decisive win.

In the men’s steeplechase, Adam Kirk-Smith of Derry City TC was the winner, with Jayme Rossiter  of Clonliffe given second place after defending champion Rory Chesser of Ennis TC was disqualified for stepping outside the line at the water jump. 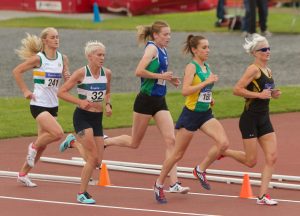 Raheny’s Kevin Dooney ran a brave race for victory in the men’s 10,000m with his time of 29 mins 30.16 secs enough to see off the challenge of his club mate Mick Clohisey and Clonmel’s Kevin Maunsell.

Bandon’s Phil Healy had a busy day first winning the 200m in 23.56 secs,  ahead of Cliodhna Manning  from Kilkenny City Harriers and Ferrybank’s Niamh Whelan, and then lining out in the 400m heats. She duly booked her place in tomorrow’s final, where she will face old rival Sinead Denny of DSD.

Ryan McCullough of Donore won a competitive men’s hammer with a throw of 65.84m. Successfully defending her women’s discus title with a throw of 51.17m was Clare Fitzgerald of Tralee Harriers. Grace Casey of Eire Og Corra Choill won the women’s javelin with a 43.42 effort, while a throw of 62.94m gave Stephen Rice of Clonliffe victory in the men’s javelin.

With defending champion Sean Breathneach out for the rest of the season with a calf tear, Dave Tierney of Leevale won the 56lb for height.
In the triple jump, Saragh Buggy’s winning leap of 13.01m was a championship best performance. Denis Finnegan of Riocht won a sixth consecutive men’s title with 15.39m; it was his eight title in total.

Lining out in the 800m heats was Ciara Mageean of UCD, who duly won the first of three heats. Clare Mooney of Naas AC won the second and Fiona Kehoe of Kilmore the third. In  the men’s 800m heats, Mark English (UCD), Karl Griffin (UCD), Kieran Kelly (Raheny Shamrock), and Harry Purcell (Trim) all came through.

MICHAEL MCKILLOP has won his second gold at the Para Athletics World Championships in London storming to victory in the T37 1500m  having won the 800m last weekend. It was a remarkable ninth world gold for the Antrim athlete.

In wet conditions, McKillop took the lead at the bell with  Liam Stanley of Canada on his tail. Only in the final 100m did McKillop break clear for victory in 4:36.38. Stanley finished in 4:37.96 for silver with Algeria’s Madjid Djemai taking the bronze in 4:41.93.

Earlier, Cushinstown’s Paul Keogan  nailed down a place in the T37 400m final when he won his heat in  57.07 secs. Deirdre Mongan  finished seventh in a competitive F53 shot final with a 4.09m effort.