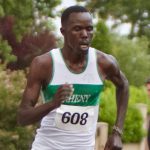 k  of Raheny and Ciara Hickey from Bros Pearse made it a Dublin double at the Michael Fearon /Kevin Marron 5km,  organised by Glenmore AC from their headquarters on the Cooley Peninsula in Co Louth on Friday evening.

Sittuk outlasted Ben Branagh of St Malachy’s in the chase for the line to win in 14 mins 42 secs.Hickey, a former Dublin masters cross-country champion, was the class of the field in the women’s race. There was a phenomenal run from Rose Lambe of Carrick Aces, who was not only second master overall, but first  W55, beating many women half her age. Sittuk went on to win today’s Duleek 10km,  beating Ballyfin’s Colin Maher and Clonliffe’s Gary O’Hanlon who was first M40. First woman was Nicola Bull  of Star of the Sea.

STAR OF THE Celtic Games held in Santry was Jade Williams  who set a new games record of 61.09m when winning the women’s hammer. here were also wins for Anna Macauley in the U18 girls’ 100m hurdles, Laura Nicholson in the steeplechase, Miriam Daly 400 in a time of 56.36, Lauren Roy 100m, Alana Ryan 200m, Sophie Meredith long jump Katie Moynihan javelin, Dean Kelly high jump and the 4x100m relay.

In the boys’ competition, James Kelly won the shot with an impressive 18.12m effort. There were also wins for Shane Monagle won the 100m hurdles, Ruarcan O Gibne the steeplechase, Tony Odubote the 400m , Jack Mitchell the 400m hurdles, Sean Mockler hammer (60.92), Jerry Kerry high jump and the 4x400m quartet.
At U16 level, Adam Sheridan won the shot with 14.47, Ciara Sheehy the discus with 33.66 and Cian McPhilips the 800m. Ireland were the overall winers beating Scotland and Wales.

IRELAND picked up three more medals on the final weekend of the European Masters Athletics Championships in Aahus, Denmark. In yesterday’s 800m finals, Kelly Neely of City of Lisburn finished second in the W35 800m.  Winner was Aneta Kaczmarek  of Poland in 2:09.86; Neely ran 2:12.58 for second. Silver also went to Anne Gilshinan  of Menapians AC  in the W50 race. She finished in 2:25.87 behind Dutch athlete Nicole Weijling-Dissel  whose time of 2:17.77  was a European record. Today, the Irish quartet of John O’Loughlin, Malachy Campbell, Patrick Crossan and  Shane Sheridan took bronze in the M50 4 x 400m with a time of  3:53.23. German was first and France second. Ireland also finished third W45 team in the half marathon.

Ireland finished 25th on the medals table  with 17 medals in total; gold for Ciaran Doherty in a thrilling M40 steeplechase and Jackie Carthy in the W45 cross-county, as well as five silvers and ten bronzes.