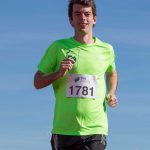 Paul Pollock  of Annadale Striders and  Kilcoole’s Fionnuala McCormack  will lead a team of five Irish marathon runnes at the World Athletics Championships in London next August 4-13.

Robert Heffernan  of Togher  will compete in the 50km walk along with  Letterkenny’s Brendan Boyce and Leevale’s Alex Wright.

Also selected for the Irish team is  Dublin-based Cork ultra runner Eoin Keith. This weekend, Keith is aiming to run  the 563 kilometre (350 miles) length of Ireland from Malin Head in Donegal to Mizen Head in Kerry in under 4 days. Should he success, he will set a new world best for the classic run. Keith starts his run on Saturday.

Others on the team for Belfast include brother and sister Tim Brownlie and Susan McCartney, who will line out in Monday’s Belfast Marathon as part of their preparations.