Thomas Barr of Ferrybank is completely recovered from a recent injury and definitely running  in the 400m hurdles at this weekend’s Irish Life Health Track and Field Championships. He’ll be joined on the line by his training partner Paul Byrne of St Abban’s who recently ran a lifetime best of 50.04 secs. Also lining out is Jason Harvey of Crusaders and young pretender Joe Halwax from DSD, which means the top hurdlers  in the country at the moment  will race each other.

Also looking good is the men’s flat 400m, where  Clonliffe’s Brian Gregan will take on a field that may include Trim’s Harry Purcell, who has had an exhausting US college season and is just home from the European U23s.

Also competing at the European U23s were Siofra Cleirigh Buttner of DSD and UCD’s Alanna Lally of UCD who are both taking well-earned rests.  Mark English of UCD is entered for the 800m, but had a poor run at the recent Anniversary Games in London. Karl Griffin of UCD is also on the list of entries, as indeed is Harry Purcell.

UCD’s Ciara Mageean is in top form and listed for both the 800m and her specialist 1500m, which she will run in the upcoming World Championships. Also entered for the 800m is current Irish record holder Roseanne Galligan of Newbridge, who has had a quiet season so far;  Claire Mooney of Naas AC and Emerald’s Jenna Bromell are also listed.  Man of the moment Sean Tobin of Clonmel leads the entry for the men’s 1500m, with Eoin Everard of KCH, Andrew Coscoran  from Star of the Sea and Danny  Mooney of Letterkenny also penciled in.

The women’s 5000m looked to be a highlight of the Saturday programme, with Emma Mitchell of Queen’s, Shona Heaslip of Riocht, and Letterkenny’s Annmarie McGlynn lining out and all three of them chasing sub-16 minute times.  John Travers of Donore Harriers leads the entry for the men’s 5000m. In the women’s steeplechase,  Rio Olympians Michele Finn and Kerry O’Flaherty are hoping that good conditions will allow them get under the World Championships qualifying mark of  9 mins 42 secs. Entered for the men’s steeplechase are David Flynn and Jayme Rossiter  of Clonliffe and defending champion Rory Chesser of Ennis TC  – and Sean Tobin.

A big entry of thirty has signed up for the men’s 10,000m, which (I think) includes a team element. Lining out for Clonliffe Harriers are Sergiu Ciobanu, David Flynn and Gerry Deegan. Mick Clohisey and Kevin Dooney run for Raheny Shamrock and a trio of Rathfarnham athletes is led by mountain runner Brian Furey. Also listed are  Kevin Maunsell of Clonmel, Galway’s Gary Thornton  and Declan Reed from City of Derry Spartan.

Bandon’s Phil Healy ran a personal best of 23.32 secs for the 200m at the Cork City Sports, and she’s down to run  the 100m and 400m as well as the 200m this weekend. Amy Foster of  City of Lisburn leads the 100m entry. After a personal best at the European U23s, Sarah McCarthy is penciled in for both the 100m and the 200m. In the 400m, Sinead Denny of DSD is the form athlete. Away at the European U20s are Ciara Neville, Sharlene Mawdsley  and Mollie O’Reilly, who are all likely future champions.

Also missing is the defending women’s high jump champion Sommer Lecky of Finn Valley. She’s competing at the Commonwealth Youth Games in the Bahamas along with sprinter  Aaron Sexton of North Down, hurdler and multi-eventer Anna McCauley  from City of Lisburn and 400m runner Davicia Patterson  of Beechmount Harriers. 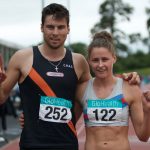 sprints have a bare look about them with seven times Paralympic champion Jason Smyth taking a rest and his young rival Marcus Lawler of St LOT injured.  Out of the  men’s 110m hurdles is defending champion Ben Reynolds of North Down.

In the field events, Adam McMullen of Crusaders in the men’s long jump and  triple jumper Saragh Buggy of St Abban’s look like extending their winning streaks, with both having recorded personal bests in recent weeks. Unfortunately, Sean Breathnach of Galway City Harriers, who won the shot, as well as both  56 lb throws last year, is out for the rest of the season with a calf tear.  Opting for the shot this year is Colin Quirke of Crusaders, better known as a discus thrower.  Not defending her title is many times Irish javelin champion Anita White who is taking the season off.

Sunday’s session will be broadcast live on RTE television from about 6pm.