Emma Mitchell of QUB ran a new Northern Irish record time of 32 mins 51.78 secs to finish seventh in the women’s elite race at the Highgate Night of 10,000m PBs in London. That time is comfortably inside the qualifying mark of  33 mins 6 secs for next year’s Commonwealth Games, as well as the 35 mins for the World University Games next August.
Letterkenny’s Anne Marie McGlynn,  now aged 37, clocked a massive personal best and new Irish W35 record of 33:16.73 for 14th place, while Danielle Fegan of Armagh ran a time of 35:27.66 to finish second in the B race.  Beth Potter of Shaftesbury Barnet was the elite race winner in 32:04.63, with Steph Twell of Aldershot Farnham and District second in 32:16.23.

MICHAELA WALSH of Swinford set a new Irish junior hammer record of 61.84m at the Halle Throws Meet where she won the U20 women’s competition and comfortably qualified for both the European U20 (57.50m)and U23 Championships (60m) later this summer. She also competed in the U23 shot putt competition, with her best effort of 15.46m another national junior record. Also entered were Brendan O’Donnell in the U20 men’s hammer and Grace Casey in the U20 javelin. 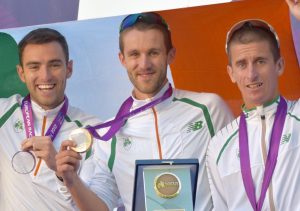 Catch-up: Paul Robinson of St Coca’s showed that he is right back in form when he ran 3:39.28  to  finish 14th in the 1500m at the USATF Distance Classic at Eagle Rock in California on May 18. Eoin Everard of Kilkenny recorded a time of 3:41.57 to finished 23rd.  Race winner was Matt Centrowitz of Nike Oregon Project in 3:33.41; second was Mo Farah, also Nike Oregon Project, in 3:34.19. Acting as a pacemaker in the steeplechase was Tomas Cotter of Dunleer. Also: Trim athlete Harry Purcell’s time of 47.47 secs run at the Big East in Villanova on May 13 puts him top of the Irish rankings and is a B qualifying mark for the European U23 Championships. A is 47.10; B is 47.85.