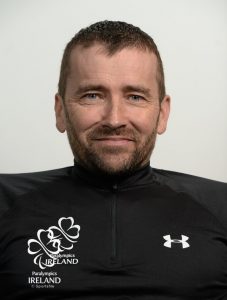 Four times Paralympian John Fulham was last night elected unopposed as the next president of Paralympics Ireland succeeding Jimmy Gradwell who had served two terms spanning eight years.
Fulham, a wheelchair racer,  competed successfully for Ireland at four Paralympic Games from Barcelona 1992  in the 100m and 200m,  also taking European titles over these distances. On the roads, he won the Dublin Marathon three times.

Now aged 45,  Fulham also played on the Irish wheelchair basketball team for fourteen years.  When he retired from sport, he was appointed to the board of the Irish Wheelchair Association, acting as communications officer for many years, and becoming vice-president in 2013.
Double table tennis Paralympian Eimear Breathnach was re-elected vice president; Mairéad Farquharson, who coached Fulham, Patrice Dockery  and many others, was elected second vice president.