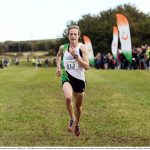 Fionnuala McCormack  finished a fighting second in the women’s 6km at the Great Edinburgh Cross Country  on the rolling hills of Holyrood Park.

After the  Kenyan-Turks,  Yasemin Can and Meryem Akdag, moved the the front, McCormack  was the only athlete who attempted to keep in touch. Can, the European champion, pulled away for a decisive victory in 20 mins 26, but McCormack caught the tiring Akdag  on the final lap and finished second in 20:57, with Akdag five seconds behind for third. It was a fifth consecutive second place in the race for McCormack, who had also won it twice

An Irish team consisting of John Travers  from Donore Harriers, Kerry O’Flaherty  of Newcastle, Raheny’s Kieran Kelly and Ciara Mageean  of UCD finished fourth in a closely-fought 4x1km relay.  Travers had the tough task of leading off the team  and completed the lap in 2 mins 39 secs  for a  fifth place. He handed over to Mageean who pulled the team up  to third.  Kelly dropped one place back to fourth before handing over to O’Flaherty.Winning  in 11 mins 10 secs was a British team led by Laura Muir, with the USA second in 11:17 , Scotland A third in 11.18, Ireland fourth in 11.22 and Europe fifth in 11:23.

In the men’s 8km, Mick Clohisey, who was running for Europe, finished 26th in 25 mins 52 secs. Leonard Korir, the Kenyan-born American, sprinted  past  Scotland’s Callum Hawkins  for a last gasp victory in a thrilling race.  Third was  the 22-year-old Kenyan-born Aras Kaya in 24:21;  in 2015, Kaya won the Russian cross-county title in 2015 while attempting to gain Russian citizenship. When that didn’t work, he turned to Turkey and became eligible to compete for them in June 2016. Junior race winners were Harriett Knowles-Jones of Great Britain and Noah Affolder  of the USA