Tallaght’s Rhasidat Adeleke ran a personal best of 25.16 secs to win her heat in the opening round of the women’s 200m at the European Youth  Olympic Fest 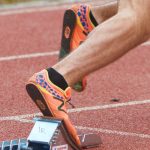 ival in Gyor Hungary today.  She will run in tomorrow’s final.

Colin Doyle, of Leevale AC finished third in his men’s 200m heat in 22:31 secs, but although he made the semi-finals was forced to withdraw with a hamstring injury.
In the women’s 3000m, Mia McCalmont of Tir Chonaill AC finished 12th in 10:12.00. Lagan Valley’s Alex Boyd was running in the men’s 1500m, where he finished 15th in 4:16.83.
In the field, Liscarroll’s Ciara Sheehy placed tenth in the women’s shot put with a best of 13.60m.Sean Carolan of Nenagh AC was left hanging around for three hours when his long jump final was delayed by thunderstorms. He ended up 11th overall.

As well as Adeleke in the women’s 200m final, Sarah Healy of Blackrock goes in the second semi-final of the women’s 1500m. With a personal best of 4:20.84, Healy is the fastest in her semi-final by 10 seconds.  Holder of the championships record for this event at 4:15.56 is  Ciara Mageean, who ran at EYOF when it was held in Tampere, Finland, in 2009.