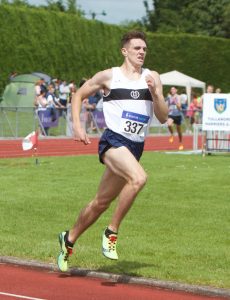 At the European Youth Olympic Festival in Gyor, Hungary, Louis O’Loughlin of Donore Harriers ran a personal best 1:54.96 to win the first of two 800m semi-finals. O’Loughlin dominated the race from early, going through 400m in 56.05 secs.

Next up were the 4 x 100m girls, who were untroubled  in their semi-final winning in 46.31 secs. Making up the team were Niamh Foley, Miriam Daly and individual medal winners Rhasidat Adeleke and Patience Jumbo-Gula.  Finals of both the  800m and the 4 x 100m take place tomorrow, as does the girls’ 1500m final, with Sarah Healy  of Blackrock AC representing Ireland.

The boys’ 4x100m relay team had to withdraw due to the hamstring injury suffered earlier in the week by sprinter Colin Doyle Leevale AC in the 200m heats.

Hehir gets ready for Worlds with win at Churchtown Sth ‘5’
EYOF: GOLD for Healy; bronze for relay four!