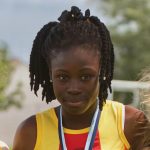 Rhasidat Adeleke of Tallaght AC has taken a silver medal in the 200m at the European Youth Olympic Festival in Gyor Hungary.
Helped by a 2.5 following wind, the 14-year-old ran a time of 23.81 secs to finish second behind Dutch athlete Zoe Sedeny who finished in 23.74 secs.
Qualifying with ease for tomorrow’s 1500m final was Blackrock’s Sarah Healy who made her move at the bell to win the opening semi-final in 4:40.52. In the second of three 400m hurdles semi-finals, Miriam Daly of Carrick-on-Suir qualified for the final, also tomorrow,  when she finished second in a personal best 61.47 secs.