Dublin Marathon – is it a fast course? 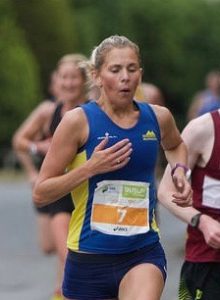 For some years now, the Dublin Marathon has incorporated the national championships – and it remains the race most self-respecting Irish distance athletes wish to win above all others.

Yet it remains a race that athletes chasing qualification marks tend to avoid, preferring to run allegedly faster courses in London, Rotterdam and Berlin. Anywhere but Dublin it would seem.

Leevale’s Claire McCarthy, who will run the marathon for Ireland at the World Athletics Championships in August next August, disputes the commonly-held view that the Dublin course is a slow one.

“I honestly think Dublin isn’t that much slower than Berlin,” says McCarthy who finished second Irish woman in the 2014 the Dublin Marathon with a time of 2:39:27. “Before I ran it in 2013, I came up to Dublin several times and ran parts of the route so I got to know it well. I think the advantage Berlin has – taking place in late September – is the weather. The weather in Dublin, taking place at the end of October, is a lot more unpredictable.”

McCarthy has run seven marathons including London, Prague and Berlin and reckons Dublin is the best organised of the lot. Plus it’s close to home and familiar.

Laura Graham of Mourne Runners, women’s winner from last year, agrees that opting for a big city marathon overseas can backfire: you’re far from home, there are bigger crowds and you can easily get sucked into a pace you’re not happy with.

“I ran London a few weeks ago and I was sure I was on for a fast time. I wanted to break 2 hours 40 minutes so I stuck with another runner, who was going at a similar pace to me. But then she fell back. I won’t do London again – I didn’t enjoy it at all.”

Jim Aughney, the Dublin Marathon race director, points out that Dublin is especially good for mid-packers, who respond to the atmosphere and the support all along the 26.2 mile route.

Sean Hehir, winner in 2013 and 2015 and second last year behind Sergiu Ciobanu, agrees. “Dublin is second to none for organisation – there’s no race like it and for us Irish athletes it has an unrivalled prize fund. I know I’m running at the World Championships and Dublin is only twelve weeks after, but I’m not ruling out doing Dublin and going for a third title.” 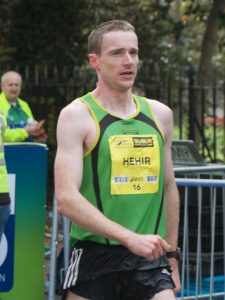 One man who has yet to run Dublin is Mick Clohisey of Raheny, whose introduction to running came from supporting his dad Vinnie and uncle John when they ran Dublin in its early days. “I remember when the race finished in Smithfield running along with my dad for the last mile from Parkgate Street in my Celtic top!”

Like the others, Clohisey pays tribute to the Marathon Mission set up by the Dublin Marathon in 2009 to improve the standard of Irish marathon running. Hopes are now high that Athletics Ireland will agree to have the Irish winner on October 29 auto-selected for next year’s European Championships.

“We have tried to have automatic selection for the Olympic in the past but didn’t succeed. Imagine if in January, an athletes knows that if they win Dublin, they will go to a major championships the following year. It would mean that they wouldn’t have to be chasing times at other races.”

* Early bird entry for the SSE Airtricity Dublin Marathon costs €70 before the end of May. With the race likely to sell out its 20,000 places well before the October 1 closing date, early entry is advised.