Cork – “the most comfortable jail”

By admin on August 4, 2019 in Articles, Markievicz 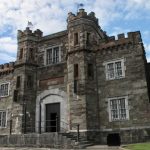 In early June 191, Constance Markievicz was arrested yet again and in Mallow, on 15 June, was sentenced to four months in Cork city gaol for making a seditious speech urging the boycotting of local RIC officers. She had been escorted to Mallow on a special train with about 30 police and “30 enemy soldiers armed to the teeth”.

“The charge is an absurdity and boils down to advising people to avoid the police; girls not to walk out with them, boys not to drink with them, ” she wrote to Kathleen Clarke. She had quoted Swift’s phrase “Burn everything British except their coal,” when addressing a  meeting in Newmarket, which one policeman took literally . “I don’t know what the Peeler’s thoughts were, who or what he believed I was urging people to burn”. There was a further allegation that she had told people to ill-treat the children of policemen at their schools, which horrified her: “I would not be represented as making war on children,” she wrote to Nora Connolly.

To her sister Eva she wrote:  “This is the most comfortable jail I have been in yet. There’s a nice garden, full of pinks, and you can hear the birds sing. I have heaps of friends here who send me in lots of very good food – in fact all my meals.” 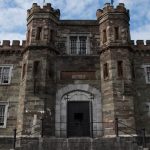 In another letter to Eva – who must have been worried about her sister – a few days later she adds: “My arrest came just at the right moment! Also I wanted a little rest and a change of air! The climate here is lovely and the situation perfect, on a hill facing to the south.”

* Cork City Gaol, in Sunday’s Well, which had 100 cells  usually occupied by petty criminals,   is now a museum open to visitors year round. A tour costs €12. See https://corkcitygaol.com/